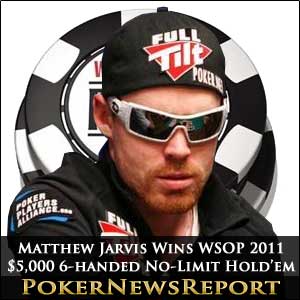 One of last year’s November Nine from the main event – in which he finished eighth – Jarvis held off the challenge from American Justin Filtz during a four-hour battle in the Rio All-Suite Hotel & Casino over two days to collect his first bracelet, although it only took six minutes and five hands yesterday to find the winner from the original 732-strong field.

Vancouver’s Jarvis took event #40, the gold bracelet and $808,538 after the marathon battle for the title – and then immediately talked about how “proud” he is of his father, who is battling against cancer.

In fact, the 26-year-old poker pro almost missed last year’s WSOP and obviously the main event, where he banked $1,045,743 from his eighth-place finish – only taking his spot in the event after his father convinced him to play.

With his dad now recovering from the illness, Jarvis pointed out that his father is “doing really well” and spoke to him just “a few minutes before” starting the second day of his heads-up clash with Filtz.

There is no doubt that Jarvis’ dad will be very proud of his son, but the gold bracelet winner couldn’t contain his delight over “the effort he’s put into everything (as) he’s doing much better now in his recovery”.

Taking down one of the toughest big fields ever assembled at the WSOP takes some doing, but Jarvis said that he has been dreaming “of a moment like this” from the day he began playing poker and to final achieve his goal “is an amazing feeling”.

Jarvis’ victory also puts Canada two clear of Britain, France and Ukraine in the chase for second spot on the bracelet winners’ list, with the new champion stating that “it’s unbelievable…there are so many great players coming out of Canada, especially in Vancouver”.

So it was the fifth hand of day four that gave Jarvis victory – and here’s how that hand played out.

On the button, Filtz quickly checked his cards and then went all-in for his last two million in chips. Jarvis called immediately to show As-8h, while Wisconsin’s Filtz held Kd-9d.

Jarvis held the pre-flop lead as both players left their seats to stand in anticipation of the community cards. The flop showed 5h-3h-6d to change nothing.

The 2s arrived on the turn to leave Filtz needing a king or nine to double-up, or a four to split the pot. But the dealer produced the 3d on the river and a deafening roar came from the rail as the smiling Jarvis – with his fist in the air – ran to celebrate with his supporters.

However, he was soon shaking Filtz by the hand, with the new champion emphasising that “Justin was really tough” to defeat as “he put a lot of pressure on me” while playing “really great the whole time”.

Top 10 placings and payouts from the $5,000 Six-Handed No-Limit Hold’em event: