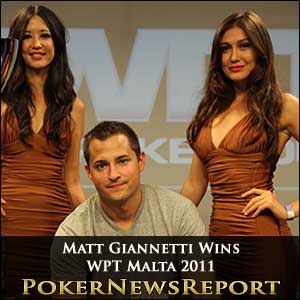 November Niner Matt Giannetti produced an exceptional performance throughout the final day – not only to emerge victorious from the tournament, but to cope with the emotional roller-coaster that is Cecilia Pescaglini.

Giannetti and Cecilia Pescaglini had come to the table respectively second and third in chips behind overnight leader Tristan Clemencon, and both were to play a major part in the day´s proceeding. Giannetti got first blood from the Italian in her first hand of the day (she arrived late), when rivering a diamond flush to reduce Pescaglini to below one million chips. Two hands later, he took another 300,000 chips from Pescaglini when rivering a full house and it looked from her face as if Pescaglini was just about to tilt her way out of the tournament.

However, as has happened so many times in the past four days, Pescaglini bounced back to take the chip lead within two hours of play. First she took a 670,000 chip pot from Simon Trumper when her 8♥ 8♣ held against Trumper´s 7♦ 7♣. Pescaglini followed that up by claiming a 125,000 pot with K♠ K♣ from Christofer Williamson and then more than 600,000 from Fabien Sartoris when an ace on the flop paired with the A♠ in her hand to cripple Sartoris and his Q♠ Q♣.

Tristan Clemencon had been far from quiet himself. Having been involved in a couple of evenly-split hands with Simon Trumper, Clemencon was responsible for the first elimination of the day – Mats Karlson in eighth – when his 9♠ 9♥ held against Karlson´s A♠ K♦. However, after Pescaglini and Trumper eliminated the two short stacks – Williamson in seventh and Sartoris in sixth – Clemencon was the next to go.

Cecilia Pescaglini had three-bet Simon Trumper´s raise when Tristan Clemencon announced he was all-in. Pescaglini called and turned over A♥ K♥. Clemencon tabled K♠ K♦ and the race was on. The flop of J♦ 10♦ 8♣ provided no assistance for Pescaglini, nor did the 3♠ on the turn. However, the A♣ on the river was typical of the good fortune that Pescaglini had experienced throughout the Main Event and sent Clemencon to the rail as well as establishing a massive chip advantage once again.

Six hands later, it was all over for Simon Trumper. Trumper shoved with his last 440,000 chips and Pescaglini called. His 7♣ 7♠ was looking good on the flop of 9♠ 6♣ 5♥ against Pescaglini´s A♠ 8♣, but the A♥ on the turn gave the advantage to Pescaglini and the 4♦ on the river sealed Trumper´s fate. As three-handed play started, Pescaglini held 4.4 million chips – almost 60% of the chips in play against Matt Giannetti and Party Poker qualifier Filippo Bianchini.

The hand after Simon Trumper´s elimination, Cecilia Pescaglini was once again in the action. With blinds at 15,000/30,000 (ante 5,000), Matt Giannetti made a post flop raise of 430,000 on a board of J♦ 8♣ 7♠ which Pescaglini called. Giannetti bet again after the Q♣ turn and 10♣ river and turned over 7♠ 7♦ for a flopped set. Filippo Bianchini also got in on the action – c-betting a flop of A♣ Q♦ 9♣ and shoving all-in on the K♥ turn. Pescaglini tabled K♣ J♠ for second pair with draw options, but Bianchini already had two pairs with his A♠ K♦ and the 2♣ enabled him to double up against the haphazard Italian and all three players were now closely matched in chips.

Six hours later, all three players were still evenly matched. Chip stacks had dipped and recovered, but it was Pescaglini who was yet again going to make her impact on the tournament when calling Filippo Bianchini´s A♦ 8♠ shove with 2♣ 2♦. The first card out on the flop was the 2♥ and Pescaglini´s rail went crazy as the remaining cards gave Bianchini no help at all. Matt Giannetti eliminated Bianchini two hands later, when his 6♥ 6♦ held against Bianchini´s 4♠ 3♥.

Going into the heads-Up it looked very likely that Cecilia Pescaglini was going to become the first ever female winner of an open WPT event. Her massive chip advantage allowed her to take the first six pots uncontested (blinds now 50,000/100,000), however the poker game was about to be turned on its head. First Matt Giannetti bet Pescaglini out of a couple of hands and then took a slight chip advantage when getting all-in with pocket Aces. Two hands later it was all over.

Following a pre-flop raise and call, Pescaglini bet 550,000 on a flop of 10♣ 8♥ 2♣. Giannetti moved all-in, Pescaglini made the call and was ahead when the players turned over their cards.

Giannetti 9♣ 7♦ for an open-ended straight draw

Pescaglini´s initial joy at the balance of the hands turned to dismay as the J♠ came out on the turn, and with no help on the river (2♠), Cecilia Pescaglini was out of the tournament and Matt Giannetti became the inaugural WPT Malta Champion.