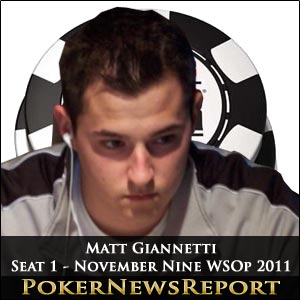 Matt Giannetti is a native of Las Vegas and will therefore by one of the best supported players of the WSOP November Nine of 2011.

Originally from New York, Matt graduated from the University of Texas before discovering poker in 2006. Now a full-time professional player, Matt´s best performance in a previous WSOP Main Event came in his first year of trying, when he cashed $22,266 for finishing in 521st position.

How Matt Reached the Final Table

Matt´s inclusion in the November Nine was due to Jacks twice paying him off late on Day 8. Starting the 10-handed play as the shortest stack in the field, Matt twice put his tournament life on the line with pocket Jacks and both times it paid dividends – doubling up against John Hewitt (A♠ 10♥) and then repeating the feat less than an hour later against Ben Lamb (K♥ 9♠). A further uncontested shove against Eoghan O´Dea and Martin Staszko sees him enter the climax of the Main Event in what looked like an unlikely third position two hours from the finish, with 24,750,000 chips.

Prior to Matt qualifying for the WSOP Main Event Final Table, he had never won a major live poker tournament. Like many USA based players he attended the Partouche Poker Tour, EPT London (3rd in a side event for $19,000) and WSOPE in Cannes, but he also played in the WPT Malta, where he came from behind against the erratic Cecilia Pescaglini to win the WPT Malta Main Event and €200,000 first prize.

Now that Matt has won his first major tournament, the experience may not be too much for him to cope with – he certainly will not have a Cecilia Pescaglini to contend with! In seat one at the final table, he will have position on Ben Lamb and Martin Staszko and should be able to run into one of the top three places. Whether he yet has the attributes to capture the WSOP Main Event outright we will not find out until Tuesday night, but we wish Matt the very best of luck in the event.