Mat Carlsson has lifted the PokerStars ANZPT Perth main event for $80,848 by seeing off the challenge of 309 opponents at the Burswood Casino. 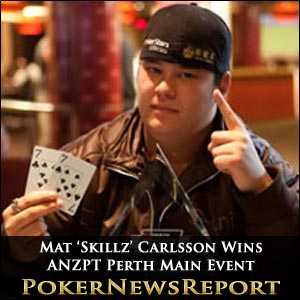 The five-day event – which made up part of the second stop on Season Four of the ANZPT – saw Carlsson crowned champion after nearly eight hours of play at the nine-handed final table as the Perth player joined the likes of Grant Levy and Tony Hachem as champions in the Western Australia city.

Carlsson showed aggression, as well as some solid play, to battle through the field and a tough final table as he became the first local to seize the trophy and top prize when he beat another Perth player, Anthony Marenko, heads-up to leave the runner-up with $51,231.

With Anthony Aston eliminated in third for $28,497, Marenko held a small chip lead over 22-year-old Carlsson when heads-up play began.

The eventual runner-up actually seemed poised to take the title, before Carlsson’s Q♠ 3♥ overcame Marenko’s Q♣ 5♦ on a flop that read 3♦ Q♦ 4♠. Marenko had top pair, but Carlsson’s two pair stayed ahead through the turn and river for the latter to take a strong lead in their head-to-head.

It wasn’t long before Carlsson was crowned champion, however. The final hand saw Marenko – on he button – limp in, only for Carlsson to raise 150,000. Then Marenko moved all-in with K♠ 2♦ to be called by the former, who showed 7♣ 7♠.

The final day started well for Canberra’s John Shin as he took control early on, although it was Aston who scored the first knockout when sending 24-year-old local Lucas Mierzwa to the rail in ninth place for $6,724.

Aston, on the button, and small blind Mierzwa went to war pre-flop as all the chips hit the table. Aston showed A♣ Q♠ to find himself well behind the A♥ K♣ of Mierzwa, before the 9♥ J♣ Q♣ flop handed the former top pair. The 7♠ turn and 8♣ river changed nothing – and that was that for Mierzwa.

Another local, 27-year old financial adviser Paul Satzke, was next to go in eighth place for $9,125, when his pocket threes couldn’t beat 20-year-old Didier Guerin’s 8♦ 4♦.

Sydney’s Guerin opened for 36,000 before Satzke shoved all-in for 119,000. The action folded around to Guerin, who made the call, if a little reluctantly. The 2♦ J♣ 6♦ flop handed Guerin a diamond flush draw, although Satzke was still ahead. But the 4♠ turn then put Guerin in front with a pair of fours, before the 5♦ river handed Satzke a straight – only for him to lose out as Guerin had completed his flush!

Seventh place and $11,527 surprisingly went to 28-year-old student Shin, who had been on a charge until being crippled when Marenko’s gutshot straight beat out his top two pair.

Kingston farmer David Lloyd, who was on the button, also moved all-in to isolate the short stack as Guerin folded. Shin showed K♠ J♥, while Lloyd tabled J♠ J♦ to have the lead. The board ran out Q♦ 5♣ 4♥ 8♠ 10♥ for 30-year-old Lloyd’s jacks to stay ahead for the knockout.

Carlsson was all the while building up a healthy chip stack by making aggressive three and four-bets pre-flop – and continued his charge to glory by eliminating Guerin in sixth place.

Carlsson swiftly eliminated another player, Lloyd, in fifth place for $17,611. Lloyd shoved all-in for about 300,000 and was called by big blind Carlsson, who tabled K♥ K♣ for yet another huge pair. Lloyd knew he was in deep trouble when he showed K♠ Q♠. The 9♣ 10♣ 5♠ 8♥ 2♠ board did not improve Lloyd’s hand to leave us with just four players.

Amazingly, Carlsson found pocket kings again a few minutes later, although this time overnight chip leader Jon Curtis – with ace-queen – rivered an ace to break the chip leader’s dominance and bring him back into contention for the top prize.

Marenko made the call to show K♥ J♠ for top two pair, while 43-year-old Curtis revealed Q♥ 10♥ for a straight and the lead. However, the dealer turned over the K♠ to hand Marenko a full house from a four-outer on the turn, while the 3♣ river changed nothing.

Three-handed play proved exciting as the chips moved back and forward between the trio of Carlsson, Marenko and Aston. However, a third-place finisher had to be found at some point and it was Canberra 20-year-old Aston who missed out on the heads-up battle when exiting for $28,497.

Aston showed 10♦ 9♦ to be in trouble – and so it proved as, although he gained an open-ended straight draw on the 5♣ J♣ Q♥ flop, the 10♣ turn and 6♣ river ensured that he again finished in third place in an ANZPT main event following his exit from Sydney a few months back.

The next stop on the tour pulls into New Zealand for six days of action from July 24 to 29 at Queenstown’s Skycity, where a NZD$2,700+NZD$300 buy-in No-Limit Hold’em main event will be offered.