The Main Event for one of Europe´s longest running poker festivals gets underway today after being delayed a week because of WSOP “Niner” Michiel Brummelhuis. 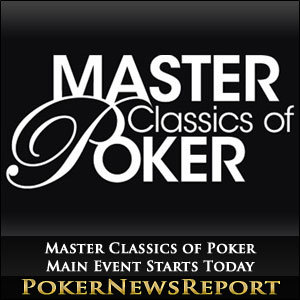 The Main Event for one of Europe´s longest running poker festivals gets underway today after being delayed a week because of WSOP “Niner” Michiel Brummelhuis.

The twenty-first series of the Master Classics of Poker (MCOP) got underway last weekend with a massive player´s party at the Holland Casino in Amsterdam, after the series had been delayed by a week to allow friends and supporters of Dutch poker star Michiel Brummelhuis to follow his progress at the final table of the WSOP Main Event (Brummelhuis finished seventh for $1,225,356).

Brummelhuis is expected to be one of the star names playing in today´s €4,000 buy-in Main Event – a tournament which was first won by Surinder Sunar in 1993 and has a roll call of winners which includes Hendon Mobster Ram Vaswani and WSOP Bracelet winner Robert Mizrachi. Last year´s winner Ole Schemion collected €286,200 for his victory and this year´s prize pool is expected to exceed €1 million once again.

The MCOP Main Event is a four day tournament with just one starting flight (today). Although officially capped at 250 players, the Holland Casino managed to squeeze 291 players into the series´ opening event (result below) and, with unlimited re-entries available throughout Day 1, it is conceivable that there could still be 250 players involved in the MCOP Main Event when Day 2 gets underway on Wednesday.

The cards will be in the air for Day 1 of the MCOP Main Event at 3.00pm and the plan (subject to the tournament director´s discretion) is to play eight 60 minute levels. This means that, by the end of the night, blinds will only be 300/600 (with a 75 chip ante) and a player re-entering with a 30,000 chip starting stack will still have fifty Big Blinds to play with.

The first two side events of the Master Classics of Poker have already concluded, with victory in Event #1 – the two-day €1,500 buy-in NL Hold´em Event – going to Utrecht native Florens “Rens02” Feenstra. Feenstra, who won the €10,000 MCOP High Rollers in 2012, outlasted a field which included Fatima Moreira de Melo, Sorel Mizzi and Steve O´Dwyer, and arrived at the Final Table second in chips behind another local player Arnould van der Werf.

Feenstra played a great final table to take a 3:1 chip advantage into the heads-up against van der Werf, but a double-up by van der Werf in one of the first hands of the climax brought the players virtually level on chips. A deal was agreed that locked up €114,000 for Feenstra and €110,000 for van der Werf with the “small change” (about €20,000) to play for.

The final hand saw Florens Feenstra get all in with A♥ Q♦ and van der Werf called holding 7♣ 8♣. The flop of 9♠ 4♣ 6♣ gave van der Werf plenty of outs to double up, but he missed them all on the Turn (2♦) and River (4♥) to enable Feenstra to collect the first title in this year´s Master Classics of Poker.

Event #2 was a €200 re-buy Pot Limit Omaha tournament which attracted 172 entries, 351 re-buys and 137 add-ons – creating a prize pool of €125,591. Because of the large entry, the tournament ran into a second day, and sixteen players returned for the conclusion of the event – headed by local player Hugo Leung.

Unfortunately for the home supporters Leung could not maintain his chip advantage and he was busted out in seventh. Compatriot Maik de Rijk picked up the mantel for the Dutch, and took a 2:1 chip advantage into the heads-up against Finland´s Mikko Turtiainen; but Turtiainen doubled-up into the chip lead in the first hand of heads-up play and was thereafter the stronger player – rivering a street in the final hand of the night to claim victory and the €34,537 first prize.