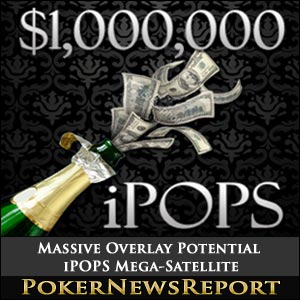 Yet again there is a massive overlay potential in an iPOPS Mega-Satellite.

Tonight (Saturday) sees one of the last William Hill Poker Mega-Satellites to iPOPS #4 – the $500,000 guaranteed feature tournament which will see the final table played live in Prague – and, to date, only 124 players have registered for tonight´s $55.00 buy-in qualifier. With the top 100 finishers each receiving seats for the $135.00 buy-in target tournament, this currently represents an overlay of $7,300 or 54% EV+.

The Mega-Satellite starts at 7.30pm (GMT) tonight and sub-satellites and Sit ´n´ Go qualifiers are being played throughout the day on the William Hill Poker web site.

Another iPOPS Mega-Satellite in Trouble

Monday night´s $44.00 Mega-Satellite to iPOPS #1 also looks like being under-subscribed as well. To date only 99 players have registered for the qualifier which sees seats in the $200,000 guaranteed tournament awarded to the top 100 players – despite sub-qualifiers for the event starting from as little as $0.11. It is worth keeping an eye on this tournament which starts at 8.00pm on Monday to see if it represents value to players not yet qualified for the iPOPS #1 final.

iPOPS Series Could be Under-Subscribed by Half a Million Dollars

With just 9 days to go to the start of the four tournament iPOPS series, the top people at William Hill Poker (and other skins on the iPoker network) must be scratching their heads to discover why this series has not captured the imagination of the online poker playing public. It could be a matter of one series too many, as (without counting the remaining mega-satellites) they are currently looking at an overlay in excess of $800,000!

Get the Value at William Hill Poker

William Hill Poker is one of the most ambitious and innovative online poker sites when it comes to rewarding players for their loyalty and they now offer a 200% match bonus on first deposits up to $1,000 (£625.00) – so if you deposit $1,000, you could earn an extra $2,000 just by playing on the William Hill Poker site. They have also just launched an “End of Year” bonus promotion, which will reward players for collecting William Hill Poker Points over the next two weeks (with cash) and, of course, there are the massive overlays potentially available in tonight and Monday´s Mega-Satellites.