Although a recent attempt by Massachusetts lawmakers to legalize online poker fell short, the state lottery is convinced that poker’s popularity is on the rise. 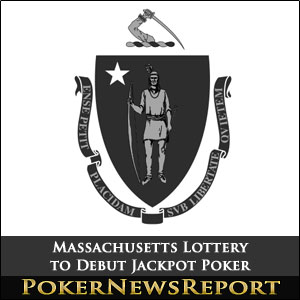 Although a recent attempt by Massachusetts lawmakers to legalize online poker fell short, the state lottery is convinced that poker’s popularity is on the rise.

The Massachusetts State lottery has announced that it will offer a new poker-themed lottery game entitled Jackpot Poker on June 17. The game requires players to select a total of five numbers from 1 through 52, which serve as the playing cards. Following a random computer drawing that selects the order of the 52 cards, winners will be determined by the best poker hands made from a player’s printed ticket.

The top prize is $25,000 for players who happen to match a Royal Flush. Other lesser prizes range from $2 – $2,000. Lottery officials calculate the odds of winning prizes in Jackpot Poker to be 1 in 4.85 and that the prize payouts will be roughly 70% of the overall money wagered. There will also be an option to play a Progressive Jackpot that increases until a Royal Flush is hit, with the winner taking home at least $100,000.

Unlike actual poker played on the live or virtual felt, card-playing skills are not required to win prizes in the newly-created Jackpot Poker game. Players simply need to match their selected numbers with those chosen randomly by the computer.

While rolling out Jackpot Poker in a few days, the Massachusetts Lottery will no longer be offering the Daily Race Game. That game employed a horse racing theme that had a successful seven-year run that concluded on June 11. The horse racing industry nationwide is undoubtedly hoping that the decision to pull the plug on a lottery game in Massachusetts is not a microcosm of things to come regarding the betting practices of Americans.

This has caused considerable tension among gaming interests in several states. And it is a major reason why legislation has not advanced in at least one state, that of California. Racetracks in the Golden State are vying to be included in the state’s proposed online poker scheme, much to the dismay of the state’s native Indian tribes.

A recent online gambling bill proposed on the federal level by Rep. Peter King (R-NY) aims to avoid those disputes by allowing equal participation by all gaming interests that include casinos, state lotteries, Indian tribes and racetracks. However, many critics have panned the proposal as being too broad in spectrum to find favor among Congressmen, among other reasons.

Massachusetts was forced to drop an online gambling amendment from its 2014 Budget Proposal when it was determined that the amendment was unconstitutional. Previous online poker and gambling bills have also failed to reach the winner’s circle in the Bay State.