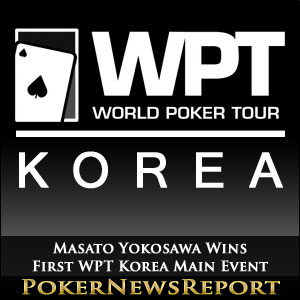 At the start of the final table, the young Yokosawa was second in chips, but facing opposition from seasoned veterans of the live poker circuit; including chip leader Chane Kamapanatsanyakorn who reached the final two tables of the WSOP APAC Main Event in April and Jae Kyung Sim, who took down the APPT Cebu in the Philippines in May.

Any pre-final table nerves that Masato Yokosawa may have had when the WPT Korea Main Event got underway today quickly evaporated as two pre-flop raises enabled him to take down the first two hands to pick up the blinds and antes (Level 22 – blinds 8,000/16,000 – ante 2,000)) and move into the chip lead. Yokosawa´s lead increased when Kosei Ichineese took a 650,000 chip pot from Chane Kampanatsanyakorn – flopping a Flush with 9♥ 8♥ – and then Yokosawa won a million chip pot from Ichineese, when the 8♥ on the River gave him a set of Eights.

Incredibly, the overnight chip leader Chane Kampanatsanyakorn was the first to leave the table, when his A♥ 5♥ failed to connect with the board against Chris Park´s 5♣ 5♠. Chris Park was also responsible for the elimination of Jae Kyung Sim in fifth, when his K♥ K♠ held against Sim´s A♦ Q♦, and thereafter the remainder of the tournament turned into a battle between Masato Yokosawa and Chris Park.

Just prior to the end of Level 24 (blinds 12,000/24,000 – ante 4,000), Masato Yokosawa enjoyed a huge slice of luck to extend his chip advantage still further. Yokosawa moved all-in from the small blind with 9♦ 4♦ and a now short-stacked Kosei Ichineese made the call with J♥ 10♥. Ichineese looked good to double-up after the flop of A♣ Q♠ 3♦, but the 4♣ paired Yokosawa´s hand on the Turn and the River bricked for Icheneese – sending him to the rail in fourth place.

Hyunshik Hun managed to nurse his short stack through a further forty hands courtesy of a double-up against Masato Yokosawa J♦ 10♥ > A♦ 6♠ but, when Chris Park attacked his big blind once again, Hun was a little too keen to shove-all in with K♦ Q♣ and paid the ultimate price – failing to improve past Park´s 10♦ 10♥ on a Nine-high board and being eliminated in third place.

Yokosawa Takes His Time to Wrap Up Victory

Masato Yokosawa took a 2.955 million -v- 1.255 million chip advantage into the heads-up against Chris Park, but seemed to have trouble in putting the tournament to bed. Both players seemed apprehensive of raising any more than the minimum and consequently, forty hands into the encounter, the chip counts were exactly the same as when the heads-up had begun.

Eventually, Masato Yokosawa won a series of hands with pre-flop min-raises (or just walks) to establish a 4:1 chip advantage, but his lack of experience showed – even when it came to the winning hand:

Yokosawa again checked following the 2♥ on the River. Park decided it was time to move all-in and Yokosawa called. Park showed A♥ 10♣ for two pairs with an Ace kicker. Yokosawa turned over 6♥ 5♥ for trip Fives to win the pot and the inaugural WPT Korea Main Event.

Masato Yokosawa´s first place prize includes a seat at the WPT World Championships at the Borgata in Atlantic City next April. We think that, in the time between now and then, it might be a good idea for Yokosawa to brush up on his endgame skills!