Maryland lawmakers will meet Aug. 9 to consider online gambling regulations in addition to an expansion of brick and mortar gambling. 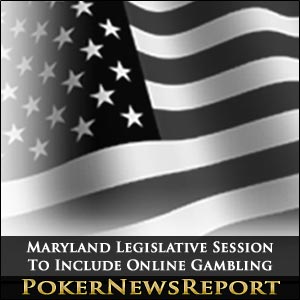 Maryland lawmakers will meet Aug. 9 to consider online gambling regulations in addition to an expansion of brick and mortar gambling.

A special legislative session has been called by Gov. Martin O’Malley to discuss adding table games such as blackjack to existing land-based gambling venues, a proposal to approve the construction of the state’s sixth casino in Prince George’s County, and the possibility of being the third state behind Nevada and Delaware to legalize forms of online gambling. O’Malley was prompted to act quickly because lawmakers in the neighboring state of Delaware passed a gambling expansion bill last month that was quickly signed into law by Gov. Jack Markell. Maryland legislators are fearful that the Delaware Gaming Competitiveness Act of 2012 that permits widespread NFL betting and keno throughout the state will put a dent in Maryland’s gambling revenue at its casinos.

In order to maintain a healthy and competitive gaming program that attracts players from beyond Maryland’s borders and keeps Maryland gamers at home, we must put our gaming program on par with other jurisdictions in the Mid-Atlantic, House speaker Michael Busch wrote in a memo to the House Democratic Caucus.

Whether the land-based gambling expansion will become a reality will ultimately be decided by voters during the November election. But in order for the referendum to be placed on the ballot, Maryland legislators must approve the measure and do so by a deadline of Aug. 20. That gives the lawmakers less than two weeks to iron out the details. Senate President Thomas V. Mike Miller doesn’t think the time constraints will be insurmountable for him and his colleagues.

We’re going to work together, said Miller, the state’s major supporter behind gambling expansion. Hopefully, we can get this done in a matter of days. I’m confident the people overwhelmingly ratify this because it’s a win-win for the people of the state of Maryland.

An influentual casino owner in Maryland, David Cordish, had previously voiced his opposition to gambling expansion in the state due to the threat of lost revenue at his Maryland Live Casino. But Cordish has apparently changed his mind on the issue as long as his casino is given the green light to offer online gambling to Maryland residents.