A brand new poker room opened at the Maryland Live! casino yesterday and hundreds of players waited in line to be among the first to play. 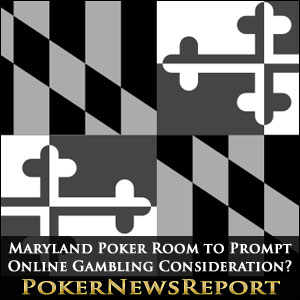 A brand new poker room opened at the Maryland Live! casino yesterday and hundreds of players waited in line to be among the first to play.

Fifty-two poker tables within 14,800 square feet of space are now available for Maryland residents and players from nearby states such as Delaware, Pennsylavania and West Virginia. The poker room in Hanover is now the largest in the area and about a one-hour drive from both Washington, D.C. and Baltimore.

The Baltimore Sun reported that players began waiting in line almost five hours prior to the poker room’s grand opening. By the time the doors opened and cards were in the air, nearly 1,000 poker players wanted to get in on the action.

Maryland is currently embarking on gambling expansion made possible by the approval of voters in a November referendum. A majority of Maryland residents voted aye for casino table game availability and the casinos have responded in kind. In April, roulette, craps and blackjack tables were added alongside the existing slot machines.

Two more casinos are currently under construction in Maryland. With live gambling booming in the Crab State, it has many wondering if lawmakers will perhaps look at online poker and gambling legislation. Just one year ago, House speaker Michael Busch cited the need for Maryland to keep pace “with other jurisdictions in the Mid-Atlantic.”

One of those jurisdictions is Delaware, which is preparing to launch online gambling in October. Maryland officials will likely be keeping a sharp eye on the success of Internet gambling expansion in their neighboring state. Should Delaware’s foray into online gambling be profitable, Maryland legislators will undoubtedly take a look at expanding in that direction as well

The excitement surrounding the opening of the Maryland Live! poker room may continue for quite some time. No-Limit Hold’em tourneys are scheduled daily and a pairing with the Players Poker Championship will allow players the opportunity to satellite their way into a Main Event in sunny Aruba.

Although the rake from live poker tables does not generate as much revenue for casinos that other games such as slots or craps do, casinos often bank on the premise that poker players bring friends or significant others who gamble elsewhere in the casino. Maryland lawmakers would be well-advised to keep in mind that the rake from online poker requires only the space of an Internet site and can be quite profitable.