Germany’s Marvin Rettenmaier ended the first day of the $2,500 no-limit hold’em event as chip leader at the World Series of Poker (WSOP) in Las Vegas. 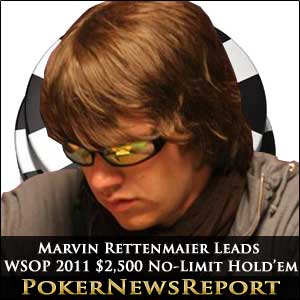 Germany’s Marvin Rettenmaier ended the first day of the $2,500 No-Limit Hold’em event as chip leader at the World Series of Poker (WSOP) 2011 in Las Vegas.

Rettenmaier, from the small town of Leonberg – which is close to Stuttgart in the federal state of Baden-Wuerttemberg – holds 174,100 chips, with American Dan O’Brien not too far behind on 168,300. Texan Sudhakara Kattamuri is in third place on 163,200, while another American, Michael Michnik, of New Jersey, sits in fourth with 136,800.

While many of those heading for the rail lasted at least a few hours, 24-year-old American Tom ‘durrrr’ Dwan – an online poker specialist – couldn’t even make it to a second hand before exiting event No.34.

The Boston University dropout – who quit to take up full-time poker – didn’t arrive at his table until after the lunch break, with his chip stack already blinded down to a little over 4,000.

He immediately shoved all-in on the button while holding 7d-6d and was called by an opponent with Kc-9c. The board gave Dwan’s rival two pair and the loser was off, having never actually sat down in his seat – with Baldwin describing the Internet star as having taken a “runner’s stance” in expectation of making a move to another event.

In fact, even before the dealer could shove the pot to his successful opponent, Dwan made a dash for it over to the Amazon Room for the $5,000 six-handed pot-limit Omaha event.

Incredibly, Dwan was signed up for three events yesterday, having also entered the $10,000 H.O.R.S.E. Championship.

As interesting as that hand was, probably the most curious of the day came when Arizona’s Tommy Vedes – while on the button – shoved with just one card when not expecting a call.

However, an opponent did make the call and Vedes then asked for another card from the dealer. The floorman was then beckoned over and the ruling came that, as Vedes was on the button, the top card had to be his.

Vedes held the Qc and the dealer gave him the top card – the Ac. He was faced with his opponent’s Ad-10d, but won the hand after another queen arrived to give him a pair.