What’s going on at Titan Poker? Having cut back on their Team Titan to include just two pros, the poker room now has not even a single player on their roster. 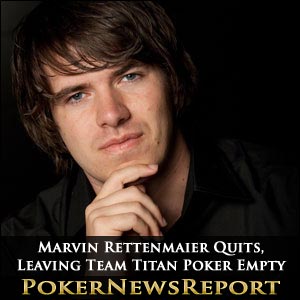 What’s going on at Titan Poker? Having cut back on their Team Titan to include just two pros for this year, the poker room now has not even a single player on their roster after German Marvin Rettenmaier announced on Twitter that he was quitting.

The Stuttgart pro was joined by Sam Trickett as the only remaining players sponsored by the poker room, but – following the Englishman’s recent announcement that he had left the team – Rettenmaier has also quit as Titan Poker made the decision to shed every one of their line-up.

While Rettenmaier and Trickett still appear on the poker room’s website as ‘The Members of Team Titan 2012’, the German took to microblogging website Twitter to write: @titan_poker has decided to part ways with its Pro Team.

It does seem a curious move by the poker room, but Rettenmaier dos not seem particularly upset, adding: I am very thankful for the opportunities and I had a great time representing them.

Of course, with more than $1.7 million in live tournament cashes since 2009, Rettenmaier – like Trickett – won’t have any problems finding new sponsors, if that is what they are hoping for.

Certainly, 25-year-old Trickett revealed that he is now on the lookout for new opportunities, but where does this latest departure leave Team Titan? With no players on their team, have they given up on sponsoring pros? Or is this clear-out just the precursor to a whole new line-up? Only time will tell.

Now, with Trickett and Rettenmaier having left the team, it does seem Titan Poker may well be going down a different route – possibly with no pro team at all.