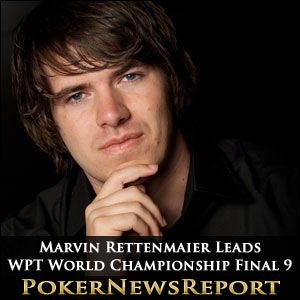 The German star won’t have things all his own way, however, as there are several big-name pros still well in contention, including Hollywood’s Michael ‘The Grinder’ Mizrachi – who will be looking to secure his third WPT title after winning the $9,700 buy-in No-Limit Hold’em Championship Event at the 2006 Borgata Winter Open for $1,173,373 and the $9,603 buy-in No-Limit Hold’em main event at the 2005 LA Poker Classic for $1,859,909.

Nineteen players started Day 5, but at least one of those, the short-stacked Josh Arieh, was unhappy at having to return just one place from the money – and even made his feelings known on Twitter.

Certainly, the Atlanta pro had a point – and his worst fears were confirmed when he crashed out in 19th place to the London-based Rettenmaier for no money.

Josh Arieh Misses Out on Money

Arieh was behind, holding just one overcard with his A♦ J♠. The board then came 10♥ 9♣ 4♠ K♦ A♠ to give Rettenmaier trip kings to beat Arieh’s aces for the elimination.

Now down to 18 survivors, the very least any of them could expect was $40,266 – and that’s exactly what Frenchman Guillaume Darcourt collected when he became the next casualty.

California’s Farzad Bonyadi was next to go in 17th place and was joined at the rail by Russian Rinat Bogdanov in 16th – both for $40,266 – to leave New Mexico’s Joe Serock leading the WPT Player of the Year standings ahead of Will ‘The Thrill’ Failla.

Joe Serock Battling for WPT Player of the Year

However, Serock is not quite guaranteed top spot just yet as California’s Moon Kim is still in contention after eliminating the other challenger, Tennessee’s Matt Juttelstad, in 13th place for $43,926. Albuquerque’s Serock had to make the top five here to be certain of the title, while sixth place would have assured him of a tie with Kim. But Serock would eventually fall in 10th place, meaning he’ll have to wait and see how Kim fares over the next few days.

Now down to just a dozen players, Rettenmaier had taken over as chip leader, although that didn’t last long as the day’s initial big stack, Hafiz Khan, doubled-up through Kim with the blinds at 12,000/24,000 and a 3,000 ante during level 21.

All the chips were in the middle on a board of J♣ 10♥ 7♣ 9♠ board, with Khan showing K♦ Q♥ and Kim revealing 8♣ 3♣ for straights, although the former’s was higher for the lead. Kim did, however, have a flush draw, but could not find the club he needed as the A♠ arrived on the river to double-up Khan to above three million.

Hafiz Khan Takes Control for a Short While

Khan continued to dominate after breaking through the four million mark when eliminating John Esposito in 12th place for $47,587, while fellow Vegas pro Ron Coury was also soon out in 11th – for the same amount – to leave us with an unofficial 10-handed final table.

Khan called to show J♦ J♠, but was behind as Mizrachi revealed A♦ Q♦. The Q♠ turn and 6♦ river gave Mizrachi a full house for the lead, although Khan wasn’t too far back in second place.

Serock Hits The Rail in 10th

Under the gun, Mizrachi opened by raising to 88,000, Rettenmaier called and so did Kim – in the hijack seat – before button Serock re-raised all-in for about 720,000. Play then folded around to Mizrachi, who also mucked, before Rettenmaier also shoved his chip stack to see Kim fold.

Serock showed 9♠ 9♥, while Rettenmaier revealed A♦ K♣ for a coinflip. The board ran out Q♠ 7♣ 7♠ K♥ Q♣, resulting in Serock’s elimination – and a sweat to see if he can hold on to his top spot in the Player of the year race. Serock has 2,200 points, but Kim can overtake that mark by placing third or better, while fourth place would result in a tie.

Just five more hands were played before level 23 – and the day – ended to leave Rettenmaier as the chip leader, although, as stated before, he won’t find it easy today as he faces the likes of former WPT champs Nick Schulman, of Manhattan, Mizrachi and Kim.

Day 6 will be ended when the six-handed official televised final table is reached. Thereafter, there will be a one-day break to allow for the $100,000 buy-in Super High Roller final table, with the main event sextet returning on Saturday.