After a spectacular day of poker at the London Hilton Metropole Hotel, it was local born ex-city trader Martins Adeniya who emerged late in the day to lead the final table of the PokerStars sponsored EPT London Main Event. 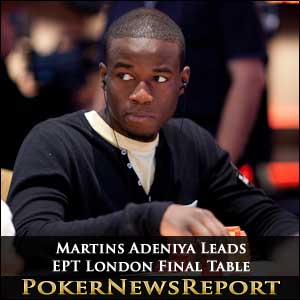 After a spectacular day of poker at the London Hilton Metropole Hotel, it was local born ex-city trader Martins Adeniya who emerged late in the day to lead the final table of the PokerStars sponsored EPT London Main Event.

Martins Adeniya over took previous chip leader Mattias Bergstrom on the final hand of the day, when he flopped a full house to collect a massive pot and eliminate Spanish poker player Adria Balaguer.

One of the most notable features of this Main Event has been the extreme levels of aggression that has been witnessed at the tables, and Day 5 was no different. It was no surprise to see Sebastian Blom shove his short stack on the day´s first rotation of the button and, within an hour, five more of the twenty four players who started the day joined him. It took a further 90 minutes until three tables were reduced to two, but thereafter there was no reprieve from the onslaught until just nine players remained.

It was not a good day to be dealt pocket Aces. Overnight third placed Pascal Hartmann was the first to get crippled by the pocket rockets, when Joao Barbosa doubled up against him with his A♥ K♠ meeting the K♥ on the flop and K♣ on the river. Despite recovering some of the ground he lost against the previous EPT Main Event winner, Hartmann was cruelly eliminated when holding Aces again – this time when Anatoly Gurtovoy (A♥ 8♥) made his flush on the river. Kevin Iacofano also benefitted from betting against Aces when his K♦ K♠ hit a King on the river to crack Martins Adeniya´s A♦ A♥ and Adria Balageur´s pocket Queens eliminated Anatoly Gurtovoy’s A♥ A♣ in the very next hand.

For much of the day, overnight leader Mattias Bergstrom had been bossing events. Having taking only the narrowest advantage into Day 5, he had built up a substantial lead of double his closest competitor when crippling Basile Yaiche with a turned full house, and pairing Ace pocket cards in quick succession to take major pots from James Mitchell and Steve O’Dwyer. However, German player Benny Spindler turned up the aggression (even more) to eliminate Ben Jenkins (13th), Hugo Loureiro (12th) and Jeremy Kottler (10th), to take a brief advantage before Bergstrom took an uncontested pot of ½ million chips from Miroslav Benes to regain the lead.

Balaguer A♠ 7♣ for flopped trips

The 2♣ on the turn and 2♦ on the river presented no help to Balaguer, and he was eliminated in ninth place, leaving Adeniya to scoop a pot of over 4 million chips and take the lead going into the final day.