Full Tilt Poker Ambassador Martins Adeniya came from last to first on the final day of the UKIPT Series 5 event to capture the title and £4,500 first prize. 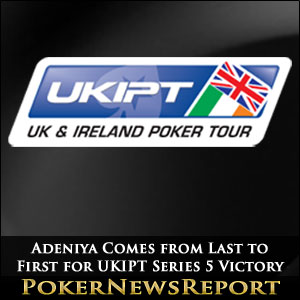 Full Tilt Poker Ambassador Martins Adeniya came from last to first on the final day of the UKIPT Series 5 event to capture the title and £4,500 first prize.

Maybe it was the proximity to the start of the World Series of Poker, maybe it was the format of the tournament or maybe it was just the good Bank Holiday weather that kept players away from PokerStars LIVE at the Hippodrome Casino this weekend, but only sixty-one players ponied up the £275.00 buy-in to compete in PokerStars Pot Limit Omaha UKIPT Series 5.

Eleven players – including eventual winner Martins Adeniya – took advantage of the opportunity to re-enter, swelling the prize pool to £17,460 – which would be shared among the top eleven players – and twenty-nine players took their seats on Sunday to play out the final day of the PokerStars UKIPT Series 5 Event.

Adeniya Gets Off to the Best Start

Going into the final day of the PokerStars UKIPT Series 5, Martins Adeniya was the shortest stacked of the twenty-nine remaining players with just 8,900 chips; and, with blinds of 800/1,600, he needed a fast start if he was to make any impact on the tournament.

An early double up with A♠ 10♠ 10♥ 3♥ (which improve to the nut spade flush) against Joe Roberts gave him the best possible start – a start which he improved on considerably in a three-way pot against Roberto Dona and Juan Ares in which his J♣ 9♣ 9♦ 10♣ connected nicely with the board of 7♠ 6♦ Q♣ / 8♣ / 6♥ to bust Dona and cripple Ares.

A further double up against Axel Briend (A♠ A♥ 6♥ 2♠ > Q♣ Q♠ J♦ 2♦) as the field was reduced to two tables moved Martins Adeniya further up the leaderboard but, as the bubble approached, he had slipped down to 54,000 chips – around half the average stack.

Marc McFadden was eliminated one place short of the money after two consecutive hands went pear-shaped for him. In the first he was up against Axel Briend with K♣ K♦ 9♣ 6♥ -v- Briend´s A♣ A♥ 9♥ 7♥. McFadden missed his flush draw and gutshot straight draw to double up Briend,

In the next hand McFadden moved all-in for his last 81,000 chips with A♠ Q♦ J♥ 10♠ against Martins Adeniya´s A♦ A♥ 10♣ 5♣. The board missed both players completely, allowing Adeniya to double up with a pair of Aces, and sending McFadden to the rail in twelfth place.

Adam Owen and Axel Briend were quickly eliminated in eleventh and tenth place respectively and, when the nine-handed final table was set, Martins Adeniya was in a comfortable third place behind chip leader Patrick Hudson:

The final table was quickly reduced to eight players when Martins Adeniya flopped a set of Aces to send Toran Nicholls to the rail in ninth place, and Grant Mason followed him thirty minutes later when his 9♣ 8♦ 7♠ 6♦ failed to improve past Patrick Hudson´s Q♣ Q♠ 3♥ 6♠.

Sam Welbourne rivered a Full House to eliminate Stephen Pearce in seventh place and then turned a straight to bust Richard Wild in sixth place, before Patrick Hudson extended his lead at the top of the leaderboard when his K♥ K♣ J♠ 7♦ proved too strong for Clifford Jacobs´ A♥ Q♦ 6♦ 4♦, and Jacobs was gone on fifth place.

Adeniya Leads into Heads-Up and Straightens Out Welbourne

Welbourne managed to close the gap between the two players when bluffing Adeniya out of a Full House on a four-diamond board, but the Full Tilt Poker powerhouse was eventually too strong for Welbourne and, in the final hand of the tournament set Welbourne all-in with A♥ 8♠ 7♥ 5♣ against Welbourne´s K♦ K♣ Q♦ 8♣.

Welbourne was still ahead after the flop of 2♥ 6♣ 9♠, but Adeniya had flopped an open-ended straight draw, and the 5♦ on the Turn gave him an unbeatable straight and completed a remarkable last-to-first comeback for the London-based poker player.