Martinez Takes the Honours on Day 1B of the ESPT Valencia

Jordi Martinez closed Day 1B of the Estrellas Poker Tour Main Event in Valencia with the biggest chip stack, but it was not big enough to take the overall lead. 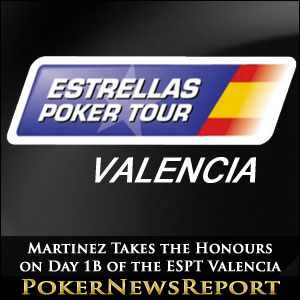 Jordi Martinez closed Day 1B of the Estrellas Poker Tour Main Event in Valencia with the biggest chip stack, but it was not big enough to take the overall lead.

Jordi Martinez is one of Spain´s top live poker players, with a portfolio of tournament successes that stretches back eight years and includes a six-figure cash in the 2010 WSOP Main Event (when Jonathan Duhamel first shot to fame).

Yesterday, at the Casino Valencia, he enjoyed another successful day – bagging up 135,500 chips after nine levels of play to be the Day 1B chip leader, but still a little way behind Day 1A´s top players Eduardo Revert (148,500 chips) and Christian Pacheco Gomez (147,800 chips).

Not Such a Good Day to Play Against Jacks

Jordi Martinez was one of only a few big names to make it through Day 1B of the ESPT Valencia – a day on which plenty of familiar faces hit the rail when taking on opponents with pocket Jacks. PokerStars´ latest Spanish-sponsored pro – Vincente “Codelsa” Delgado was bust out in the third level of the day when his pocket Aces were cracked by a set of Jacks.

Delgado was joined on the rail a couple of levels later by EducaPoker´s Marc Pujol – who was eliminated when he missed an open-ended straight draw against his opponent´s pocket Jacks – and Raul Mestre, who missed his nut flush draw against Steve Enriquez´ pocket Jacks to end the day as a spectator.

While many of Spain´s leading poker players struggled to survive Day 1B of the ESPT Valencia Main Event, a couple of players more renowned for success away from the poker tables will return for Day 2 of the event with more than a slim chance of making it into the money.

A further 271 players joined the action on Day 1B on the ESPT Valencia Main Event, creating a prize pool of €414,000 which will be shared by the top fifty-five players. 108 players from yesterday´s action will join the 50 which survived Day 1A for today´s Day 2 – during which time the money bubble is expected to burst.

A min-cash is worth €1,950, but the players below will be more focused on reaching Sunday´s final table; where the winner of the ESPT Valencia will walk away with €77,000. You can catch with all the latest news from the ESPT Valencia by following PokerNewsReport on Twitter.