Dimas Martinez has a narrow chip advantage over Shannon Shorr going into the final day of the WPT Lucky Hearts Poker Open in pursuit of the $271,000 first prize 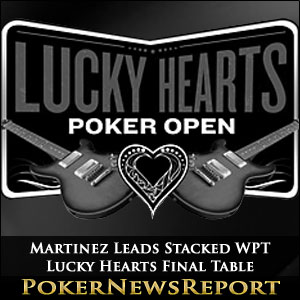 Dimas Martinez has a narrow chip advantage over Shannon Shorr going into the final day of the WPT Lucky Hearts Poker Open in pursuit of the $271,000 first prize

Thirty-three players returned to the Seminole Coconut Casino in Florida yesterday for the penultimate day of the $1 million guaranteed WPT Lucky Hearts Poker Open Main Event, each already having locked up $8,362, but looking to make a push for the six-handed final table that will take place later today.

Amazingly, among those still alive in the romantically-themed event were two courting couples – Lily Kiletto and James Calderaro, and Ronit Chamani and Ryan D’Angelo – and, of the four players, James Calderaro is still in with a shout of taking down the tournament.

Going into Day 3 of the WPT Lucky Hearts Poker Open, Keven Stammen was the only player to have a chip stack in excess of one million chips; but he was quickly overtaken by James Calderaro, who bust Otto Palacios 8♥ 8♠ > A♥ 7♥ in a million chip pot to shoot into the lead.

Martinez Moves Ahead with Quads and Flushes

Despite doubling up a couple of short stacks (and Shannon Shorr below), Martinez continued hitting the board at crucial times, and took a million chip pot from James Calderaro with a flopped set of Sixes to close the day with 3,558,000 chips – equivalent to 148 Big Blinds.

Shannon Shorr sits in second place at the final table, did not enjoy such a profitable start to the day. Shorr was tormented by Matt Waxman during the early levels of play – paying Waxman off when he missed a double-gutshot straight draw against Waxman´s rivered pair of Aces and missing an open-ended straight draw against his opponent´s lowly pocket pair (3♣ 3♠).

However, Shorr recovered by calling all three streets of Dimas Martinez´s attempted bluff to double-up into contention Q♦ J♠ > 7♥ 5♥, and then went on a heater – busting out Orlando Lorenzo in fourteenth place Q♥ Q♠ > 9♣ 9♠ and Corrie Wunstal in tenth place 9♣ 9♥ > 8♦ 8♣ before making a set of Queens against Martinez to take down a half million chip pot and finish just a few Big Blinds behind the chip leader with 3,478,000 chips.

Remainder of the Final Table Have Plenty of Chips

Behind Martinez and Shorr, James Calderaro recovered from his setback against the chip leader to bust out James Hartwick in ninth position Q♣ Q♥ > A♣ K♦, while Tim Kegel (A♥ K♥) chipped up into contention with the dual elimination of Kishor Bhakta (8♣ 8♥) and Shelby Standley (A♦ 6♠), and then just stayed out of trouble for the rest of the day.

The WPT Lucky Hearts Poker Open final table is completed by Keven Stammen – who bust out both Mukul Phuja in eighth and Justin Zaki in seventh place to set the final table – and Evan Dollinger, who will have the unenviable task of explaining to James Calderaro that he busted out Calderaro´s partner Lilly Kiletto with 4♣ 4♠ against Kiletto´s A♦ 10♠.

Looking Ahead to the WPT Lucky Hearts Final Table

When play resumes tonight at the Seminole Coconut Casino in Florida, the six remaining players will be in Level 24 with blinds of 12,000/24,000 and a 4,000 chip ante. The next player to bust from the tournament is assured of receiving $54,355, but all eyes will be on the first prize of $271,103 and the glittering WPT Champions trophy.