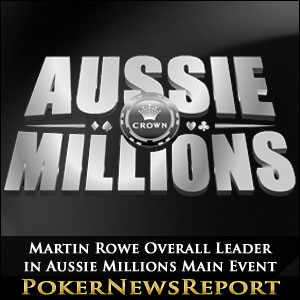 After three opening flights of action, Australian poker player Martin Rowe will lead the 383 remaining players into Day 2 of the Aussie Millions Main Event. Rowe chipped up constantly throughout Day 1C of the Aussie Millions Main Event, but his pivotal hand came towards the end of the day´s action when he moved all-in with 10♥ 10♣ on a flop and Turn of 6♦ 2♣ 4♥ / 10♥. His shove was snap-called by an opponent who had flopped a straight with 5♠ 3♠, but the 6♠ spiked on the River to give Rowe a Full House and the chip lead in the Championship event. Rowe´s opponent can consider himself to have been mighty unlucky to have been eliminated from the Aussie Millions Main Event after being a 96% post-flop favourite to prevail in the hand, but his bad beat story is just one of number that have occurred over the first three flights of the tournament.

The AU$10,600 buy-in Aussie Millions Main Event got underway on Sunday with the first of three opening flights. Due to a scheduling clash with the record-breaking $25K “Challenge” Event, few big names made an appearance among the 176 entries who contested seven 90-minute levels. 2011 WSOP Finalist Eoghan O´Dea and PokerStars pro Liv Boeree were possibly the most familiar international “names” to survive the opening flight, while Tom Grigg and Jackie Glazier represented the strongest of the home continent´s talent. All four of the above-mentioned players survived through to tomorrow´s Day 2 of the Aussie Millions Main Event, with the top six chip counts of the day looking like this:

Day 1B saw the 2013 Aussie Million Champion Mervin Chan enter the Main Event to start the defence of his title, but he was eliminated in a cruel bad beat in which his K♠ 10♥ had flopped a Broadway straight, but the board of A♠ J♣ Q♥ / 9♦ / Q♣ also made his opponent – Sotirios Kappas (Q♠ 9♠) – a Full House. The second opening flight saw a few more familiar faces join the tournament; and Eric Seidel, Antonio Esfandiari, Paul Newey, Jonathan Duhamel and Annette Obrestad were among those who nursed their stacks through another seven levels of play. An unfortunate clash with the Super Bowl led to a slightly lower turnout than had been seen on Day 1A (153 entries) and would explain why chip leader Dean Schneider had substantially fewer chips than David Malka when the stacks were bagged and tagged at the close of play.

The third of the opening flights was when the biggest Stars of the international poker scene made an entrance of the Aussie Millions Main Event, but for many of them it was not such a happy experience: Phil Ivey only lasted until Level 5, when he got all-in with A♦ J♦ on the flop of K♦ Q♥ 5♦ but failed to improve past Jimmy Nistas´ A♠ K♣ – that´s story for Nistas to tell his grandkids! Daniel Negreanu late registered during Level 4 but bust out during Level 6 when his pocket Deuces improved to a set against Nick Morales´ A♣ A♥, but then Morales spiked the A♦ on the River. Fellow PokerStars pro Isaac Haxton also fell to a suck-out – Haxton getting all-in with 6♥ 4♥ against Chuck Caris´ A♦ K♦ after the flop of 4♠ A♠ 6♦, and Caris rivering the K♥ for a better two pair. Fabian Quoss was eliminated when his 10♥ 9♥ failed to hit an overpair or complete a flush against his opponent´s 7♦ 7♠, and Dan Luck-Shak also fell to pocket pair – his pocket Eights not good enough to overcome Jarod Ludemann´s pocket Nines. It was not all bad news for the Stars of the poker world however, and Jason Mercier – fresh from his third place finish in the Aussie Millions $25K Challenge – led Day 3 of the Main Event for a short period after his 10♦ 10♥ rivered a better straight flush than Marvin Rettenmaier (A♦ 5♦). Victor Blom, Dan Smith, Ole Schemion and Patrik Antonius also survived the seven levels of action to carry forward decent chip stacks into Day 2and sit within reach of the chip leaders at the close of Day 1C.

Looking Ahead to Day 2 of the Aussie Millions Main Event

As late registration is open until the beginning of Day 2, the final numbers and the prize pool for the Aussie Millions Main Event will not be released until tomorrow. Approximately 383 players survived through the opening three flights, and when they take their seats at the Crown Poker Rooms, they will be entering Level 8 of the tournament (blinds 400/800 – ante 100). Play is scheduled to continue for another seven 90-minute levels, and you can find out who tops the leaderboard at the end of Day 2 by following @PokerNewsReport on Twitter.