Nilsson was always sure he would triumph in the Asian Poker Tour (APT) Asian Series Goa main event to secure the top prize on board the Casino Royale Goa. 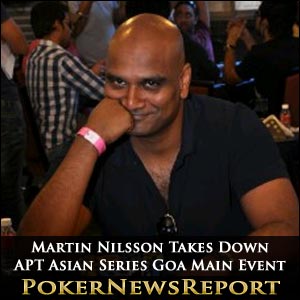 The Sri Lanka-born Scandinavian began his heads-up battle with Indian Manan Khetan well behind on chips, but quickly wrested control from his opponent to take the title, having ultimately outlasted 130 opponents in an event that offered INR 5,895,000 ($106,752) in prizes.

The cash game specialist – who lives in Beijing – was delighted by his success, but not surprised, saying: I was pretty confident at heads-up. And so he should be after also winning the Freezeout 4 side event last week for INR 146,200 ($2,650).

Swede Fights Back for Glory

The final hand of the main event saw Nilsson – who had started the 10-handed final table as chip leader – call Khetan’s all-in move on a K♣ 8♠ 8♣ flop to find himself well ahead as his K♦ J♦ gave him two pair. Khetan had shown A♣ Q♥ to find himself well behind, leaving the home favourite needing an ace or runner-runner to stay alive.

Fortunately, for Nilsson, his kings stayed in front on the 4♥ turn and 6♥ river to ensure that the Swede was champion.

Notably, Sameer Rattonsey – who finished as runner-up last year – again made the final table, but exited in fifth place INR 354,000 ($6,406). That’s two final tables in succession at this event and should most certainly be applauded.

Aditya ‘Intervention’ Agarwal Out in Ninth

Day 1b saw defending champion Sangeeth Mohan crash out again after also exiting on Day 1a, to be joined at the rail by other big-name local players such as Harshad Barve – who picked up INR 834,000 ($14,986) last week for winning event #3, the INR 150,000 (about $2,695) buy-in No-Limit Hold’em High Roller – as well as Ramandeep Singh Gujral (who re-entered after crashing out on Day 1a), Jasven Saigal and Abhishek Goindi.

Day 1a also witnessed some well-known casualties in Abhishek Goindi and Bobbe Suri.