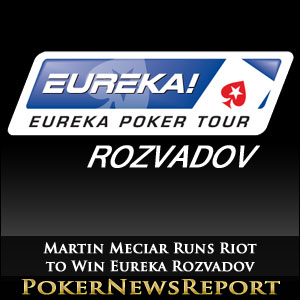 There was a good turnout for the PokerStars-sponsored Eureka Rozvadov Main Event, with 493 players ponying up the €1,100 buy-in or qualifying online to compete over two opening flights at the weekend. The 71-player bubble burst late on Sunday night, and twenty-four players returned on Monday to play for a seat at the final table.

It was in the very last hand of Sunday´s action that Martin Meciar rose to the top of the chip counts – rivering a straight with A♥ 10♦ to bust Ismail Kalkan (A♣ Q♣) in a 1.2 million chip pot – and Meciar came to the final table of the Eureka Rozvadov Main Event as the only player with more than 2 million chips.

The final table of the Eureka Rozvadov Main Event started with blinds of 25,000/50,000 and a 5,000 chip ante, and it was not long before Dawid Mysiewicz believed he had found the perfect opportunity to double up into contention for one of the major prizes. Moving all-in with A♥ K♥ he found a caller in Sascha Ranzinger, but failed to find an Ace or King on the Jack-high board to improve past Ranzinger´s Q♣ Q♠ and was eliminated in eighth place.

Martin Meciar used his big stack to squeeze folds out of his opponents to extend his lead at the top of the chip counts and – after Sascha Ranzinger had eliminated Michael Eiler in seventh place A♥ K♥ > A♦ J♠ – Meciar was responsible for sending the dangerous Bert Geens to the rail in sixth place A♠ A♥ > Q♣ 10♣ and building his chip stack to 3,790,000 chips.

Sascha Ranzinger continued to be the most active player, and accounted for Christian Jambor in fifth place when his A♥ 3♠ rivered a Six-high gutshot straight to best Jambor´s A♣ Q♣; but Ranzinger´s good run came to an end after he got into a pre-flop raising war with Meciar and found himself all-in with J♥ 10♦ against Meciar´s K♥ K♦. Ranzinger flopped a Jack to pair his hand, but could find no further improvement and was out of the Eureka Rozvadov Main Event in fourth place.

With blinds now at 40,000/80,000, Beatrix Wolfsberger was the player most at risk. Wolfsberger managed to spike a Jack on the River to double up Q♠ J♠ > A♣ 6♣ against Meciar, but could not find a second escape when all-in a few hands later with J♣ 9♣ against Martin Meciar´s A♣ 10♥ and was eliminated in third place.

With such a huge chip disadvantage, Michael Passy was shoving his chip stack forward in every hand, but Martin Meciar eventually found a hand to call him with and the cards were on their backs:

The flop of J♥ 4♠ 8♣ paired Passy´s hand and presented the opportunity of a backdoor straight and flush. However the 3♠ on the Turn was a brick and Martin Meciar took the Eureka Rozvadov Main Event with his pocket Queens when the K♦ was dealt on the River.