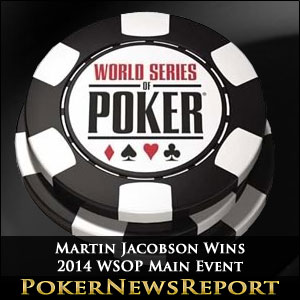 The climax of the WSOP Main Event produced a highly-acclaimed performance from Swede Martin Jacobson to see off his two European rivals and claim the $10,000,000 first prize for becoming the 2014 Champion.

His victory in the Main Event was all the more remarkable as Jacobson had come to yesterday´s final table as the second-shortest stack of the nine remaining players, and had been reduced to less than ten big blinds after doubling up Billy Pappas during the penultimate day´s action.

A couple of double ups against Will Tonking and Billy Pappas enabled Jacobson to get back into contention and, when play went three-handed, the Swede took eight uncontested pots out of ten to enter the final day of the 2014 World Series of Poker Main Event in second place behind long time leader Jorryt van Hoof.

Jacobson in Control from the Start

With the Main Event resuming at the start of Level 40 (blinds 600K/1.2M – ante 200K), Martin Jacobson wasted no time in attacking Jorryt van Hoof´s chip advantage. In the first hand he forced a pre-flop fold from the chip leader after van Hoof had raised to 2.6 million from the button and, after taking the second hand uncontested, forced Felix Stephensen out of a 6.2 million chip pot to move within eight big blinds of van Hoof after just three hands

Pocket Aces against Felix Stephensen´s paired K♠ J♥ moved Jacobson alongside van Hoof at the top of the chip counts and, in the twenty-first hand of action, Jacobson opened up a narrow advantage over the Dutchman when forcing him out of a 9 million chip pot on the flop and turn of A♥ K♠ 6♦ / K♥.

Van Hoof Out in Third – Jacobson Leads into Heads Up

Jorryt van Hoof´s misfortunes continued as the first level of play drew to a close. He was outkicked in a hand against Martin Jacobson (J♠ 9♦ > 9♣ 8♠) when both players paired their pocket Nine on the flop, and then lost another 8 million chips when Felix Stephensen four-bet jammed against his pre-flop raise.

The flop of 10♥ 5♠ 2♥ gave Jacobson the superior pair and, with the Turn (Q♣) and River (Q♠) both producing Queens, Jorryt van Hoof was eliminated in third place, while Martin Jacobson took a 142 million -v- 58.5 million chip advantage into the heads up against Felix Stephensen.

The early exchanges in the heads up battle saw fortunes swinging both ways. Felix Stephensen chipped up nicely when his pocket Sixes held to take down a 7 million chip pot but, within a few hands, Martin Jacobson had recovered the lost chips with interest when his J♣ {10♠ç paired on the flop to overcome Stephensen´s 6♦ 6♠.

A sequence of eight hands in a row enabled Martin Jacobson to build a 7:1 chip advantage against his opponent and, needing to stem the flow of chips heading towards the Swede, when Martin Jacobson next moved all-in, Stephensen made the call and the cards were on their backs:

Both sets of supporters were on the feet in the Penn & Teller Theater and calling for cards which would help their players. The flop of 3♠ 9♣ 10♣ hit both players, but hit Martin Jacobson harder as he now had a set of Tens against Stephensen´s middle pair. As a 99.6% favorite to win the hand, Jacobson only had to avoid runner-runner Aces or runner-runner Nines to become WSOP Champion, and the tournament was all over when the dealer spun over the K♦.

The meaningless 4♣ completed the board, by which time Martin Jacobson was engulfed by his supporters, celebrating his $10 million victory in the 2014 World Series of Poker Main Event.