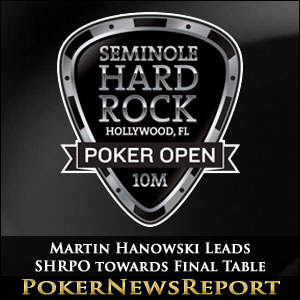 Due to the below-expected turnout, and a rash of quick eliminations when play resumed at the Seminole Hard Rock Casino yesterday, little more than four levels of play were completed on Day 3 of the SHRPO before the field was reduced to just two tables and a halt was called to the action.

Leading the final eighteen players is Martin Hanowski. Hanowski came out of top of a three-way battle for the chip lead that had been raging for most of the day between himself, Day 2 chip leader John Dolan and Shawn Cunix. Hanowski opened up a narrow chip lead prior to the dinner break, and then sealed his position at the top of the chip counts by eliminating Michael Stembera in nineteenth place.

No History for Blair – Busted by Quads

Sixty-two players returned to the Seminole Hard Rock Casino yesterday for Day 3 of the event – with one player in particular looking to make history. Blair Hinkle won the inaugural SHRPO event last year after a sensational heads-up battle against Justin Bonomo. Hinkle had been down to his last 20 big blinds at the start of Day 2, but had recovered well to finish the day with 312,000 chips.

Unfortunately, Hinkle´s stack suffered an early knock, and the last of his chips went into the middle with A♠ 8♣ (ironically the Dead Man´s Hand). Hinkle was called by 2012 November Niner Russell Thomas (5♦ 5♠), who hit the 5♣ on the flop and 5♥ on the Turn to make Quads and bust the former SHRPO Champion in fifty-fourth place.

Twenty players were eliminated from the Seminole Hard Rock Poker Open during the first couple of levels yesterday – among them John Racener (10♦ 5♦ < Roman Valerstein´s A♣ K♥) and Jim Collopy (9♠ 9♦ < Ty Reiman´s A♣ Q♠).

Jared Jaffee spiked an Ace on the River to send Doug Polk to the rail in thirty-eighth place (A♥ J♣ > J♠ J♦), and Polk was quickly joined on the rail by Joe Serock – bust in thirty-seventh place when he ran his pocket Tens into Brian Hawkins´ A♥ Q♦, and the Q♣ appeared in the window.

Shawn Cunix added to the pace at which players were being eliminated by making the dual knockout of David Tiffenberg (5♠ 5♣) and Andrew Whitaker (Q♣ Q♠) with A♥ K♠. The A♠ on the flop gave him the dominant pair, and there were no surprises on the Turn or River to prevent Cunix from (temporarily) taking over at the top of the leaderboard.

Only one lady player is left in the event – the delightful Natasha Barbour. Barbour did her hopes of a notable victory no harm when turning a Jack-high straight to bust Eugene Curzio in twenty-sixth place; but she still has work to do when play resumes at the Seminole Hard Rock Casino later today with a below average chip stack of 1,310,000 chips.

Looking Ahead to Day 4 of the SHRPO

Martin Hanowski´s elimination of Michael Stembera in nineteenth place (A♥ 10♥ > A♥ 3♥) came two hands after the dinner break; meaning that when play gets underway this afternoon, players will have 88 minutes remaining in Level 28 with blinds of 25,000/50,000 and a 5,000 chip ante. The two players most at risk from a quick elimination are Uri Kadosh (390,000 chips) and Ron Ostrow (525,000 chips), while those most likely to appear in tomorrow´s final table include: