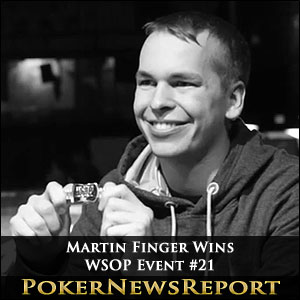 Martin Finger is $506,764 richer tonight after winning the WSOP $3,000 No Limit Hold’Em Six Handed Event. Finger bested a field of 807 played over three days to win the event.

Finger was the chip leader when the final table was set earlier on the last day, but he ended up facing an uphill battle for the victory after losing his lead in the late stages of the day.

He may have been second on the chip ladder when final table play began, but it took just eight hands of final table action for Andrew Dean to be eliminated in sixth place. Dean lost a huge hand to Matt Stout, which put him down to 419,000 chips. He hoped to regain some of his stack a few hands later, but lost a showdown to Matt Berkey, which put him down to just 40,000 chips.

This led Dean to move all in in the very next hand with 10♥ 6♥. He was called by Stout, who hit a two pair on the flop to win the hand and knock Dean out of the final table in what ended a bad run of play for the American.

Nikolai Sears was next the player to be eliminated from the event after being beaten in a showdown by Berkey. Sears was actually ahead before the flop, however, with K♦ K♣, while Berkey was initially behind with 10♠ 10♥. Unfortunately for Sears, Berkey hit a straight on the turn, which blasted his Kings and sent him packing in fifth spot.

Next to go was David Pham, who was knocked out of the tournament in fourth place by Finger just before the dinner break. With 10♥ 10♦, Pham moved all in before the flop after an initial 60,000 raise from Finger. Finger, who had K♣ Q♣, called Pham after a small moment of contemplation.

The flop of 2♣ 4♣ 4♠ kept Pham ahead, but put him on edge as Finger got a flush draw. The 8♣ on the turn gave Finger the draw he needed, which won him the hand and eliminated Pham with $131,679 for his efforts in the event.

Stout claimed his second final table scalp of the event when he eliminated Berkey from the event in third place. Berkey reraised to 275,000 before the flop after Stout initially raised to 90,000, which led Stout to move all in after Finger folded. This was called by Berkey, who had 9♠ 9♥, while Stout showed A♣ K♥.

The flop came 5♥ 2♠ A♥, giving Stout a higher pair while putting Berkey in grave danger of elimination. The 8♣ on the turn and the Q♠ on the river did not help Berkey and he was knocked out of the tournament an extra $199,733 richer.

Berkey’s elimination left Stout and Finger as the last two players in the event, with Stout having a 4.26 million chip lead when heads-up play began. It was a marathon heads-up in the tournament, with play between the two lasting just short of five hours before a winner prevailed.

Finger chipped up early in play, boosting his stack by more than a million in the first six hands as he attempted to regain the chip lead he had when the final table was set. It did not last long, however, as Stout won a few hands to regain the lead.

The chip lead then seesawed between both players for the last hour and a half, and Finger had gotten himself a small lead before the final hand of the event was played. In that hand, Stout raised to 160,000 before the flop, which Finger responded to by reraising to 400,000.

Stout, who had A♠ 7♥, moved all in and was called by the eventual winner, who showed Q♣ Q♠. The 4♥ 9♣ J♣ flop kept Finger’s Queens in the lead, and he was two cards away from taking out the event. The K♦ on the turn and the K♣ on the river gave him two pair and Stout was the last player to be eliminated from the tournament.

Along with the half million plus dollars, Finger also won his first ever WSOP Gold Bracelet by winning the event.