Martin ‘phasE89’ Balaz is preparing for a marathon series of sit ‘n’ gos at PokerStars – following up his incredible feat of playing 24,000 last October. 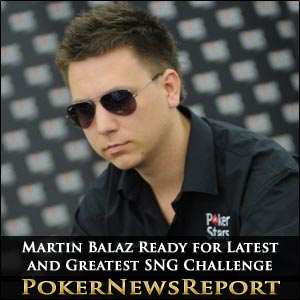 Czech Republic poker pro Martin ‘phasE89’ Balaz is once again preparing to embark upon a marathon series of sit ‘n’ gos at PokerStars – following up his incredible feat of playing 24,000 last October.

However, the 22-year-old will this time up the ante by taking part in 40,000 hyper-turbo six-max SNGs at the world’s biggest poker website next month – with the challenge being to end the series in profit, excluding rakeback.

Balaz will ensure he is fully focused on his challenge by renting a villa – along with his poker-playing girlfriend – while he will also install a webcam so interested parties can look in on how he is performing.

Last year’s challenge saw Balaz – a Fifty50 specialist at PokerStars – take on what was then a unique proposition bet that also had the caveat that he had to remain in profit without rakeback over the month.

That was certainly a tough plan, but Balaz did succeed by ending up with a profit of $2,898.83 – which ultimately converted into a $41,889 triumph when including his bet winnings and rakeback.

By the way, if you’re not exactly sure what Fifty50 is, it’s a unique form of single-table SNGs which ends after half the field has been eliminated. Thereafter, half the total prize pool is shared equally among those still left in, while the other 50% is divided among the survivors based on a player’s chip count.

Back to the challenge now – and this latest venture will be even tougher than his first when he first sits down on Friday, June 15, to play for 30 days until Saturday, July 14, with Balaz saying that he must be profitable pre-rakeback while only playing in $30-plus stakes.

Follow-Up Will Be ‘Even More Difficult’

Those higher stakes will also add a new dimension to the challenge, with the Czech PokerStars Supernova Elite member adding that it will be even more difficult than the previous epic as he will not be able to play lower stakes.

Additionally, Balaz will undertake this bet over 30 days and not 31, meaning he’ll probably take about 400-plus hours, not 380 to complete his task, while also stressing that the edge will be significantly lower because of the fact these games are already deader than dead, according to many of the regular participants at PokerStars.

However, all that has done is encourage Balaz to prove to myself that he can make really insane prop bets and be profitable in any game.

And, as the confident Balaz – who is aiming to secure a place on Team PokerStars Pro Online – is convinced he can achieve his goal, he is ready to accept bets at odds of 5/2!

While he has already taken some small bets, for as much as $500, Balaz stated that he is happy to bet up to $50,000 against $20,000 from those interested in accepting the wager, according to PokerNews.

The online pro – whose only significant live tournament finish arrived when he took 58th for $1,537 at last week’s €700 buy-in No-Limit Hold’em main event at the UK & Ireland Poker Tour (UKIPT) Dublin – is certainly keen to get some good action to make the bet more interesting.

We at Poker News Report (PNR) are sure he will, although none of us can quite afford to take up the bet, unfortunately.

Now, if you are interested in taking up his offer, or just curious to see how Balaz fares, you can check out the promotional video – created by friend Jakub ‘parez’ Freiwald – he has posted at phase89.net.