Delaware cash games player Brandon Markland heads the survivors from Day 1B of the Borgata Open Event #1 with a chip stack of three times the average. 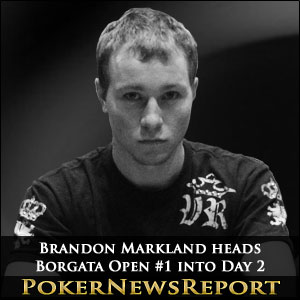 Delaware cash games player Brandon Markland heads the survivors from Day 1B of the Borgata Open Event #1 with a chip stack of three times the average.

If the response to the opening event of the Borgata Poker Open is an indicator of how popular online poker in New Jersey might be in November, then gaming regulators in other States might want to take note of these figures:-

2,812 players entered (or re-entered) the Borgata Poker Open #1 yesterday, adding to the 1,670 who competed on Tuesday and making the total number of entries for this $560.00 buy-in poker tournament an incredible 4,482.

The $2 million guarantee for the opening event of the Borgata Poker Open was easily surpassed and the top 400 players will cash in the event – with the minimum payout being $1,138 and a superb $363,091 going to the winner.

Markland Remembers How it is Done

Overall chip leader at the end of both Day 1s is cash game player Brandon Markland from Dover in Delaware; who bagged up an impressive 639,000 chips despite doubling up a player AQ < KTs in the penultimate level of the day.

Markland commented during the bagging and tagging that, although he is a regular at the $2/$5 cash game tables, he has not competed in a live poker tournament for more than three years. Markland collected a $2,000 bonus for being a Day 1 chip leader, but he is hoping to return to Delaware with considerably more.

Behind Markland in the Day 1B chip counts were Jimmy Bergen from Skyesville in Maryland (581,000 chips) and Romaine Lewis from Bridgeton in New Jersey (580,000 chips) who will start Day 2 in third and fourth positions respectively, as Day 1A chip leader Hal Rotholz bagged up 628,000 chips on Tuesday night.

A Long Day Ahead for Day 1 Survivors

Day 2 of the Borgata Poker Open starts at 11.00am and is scheduled to continue until 18 players remain or until 2.00am Thursday morning – whichever happens first! With 466 players remaining – and only 400 players due to get paid – the pace of the game is likely to be incredibly slow during the first couple of 50-minute levels in which blinds will start at 5,000/10,000 – ante 1,000.