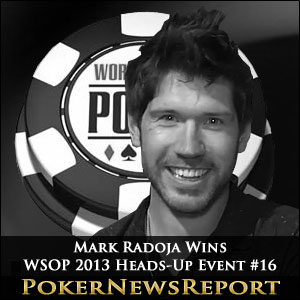 Radoja was one of the final four players who were still in event on its third and final day. Justin Bonomo was another one of the four. He faced Radoja in one of the semi-final match ups on Day 3. Ben Sulsky and Don Nguyen were the other two players who made the cut and they versed each other in the other semi-final of the day.

Nguyen got an early lead against Sulsky and had a 2 to 1 chip lead by the time the 23rd hand was played. This increased to a 5 to 1 chip lead just three hands later after Nguyen held a bigger straight then Sulsky.

Sulsky did his best to keep himself in the game and chipped himself up to around one million chips at one point in the semi-final. It was all in vain, however, as he was the first player in the semi-finals to be eliminated from the event.

Sulsky, who had A♠ J♣, was miles ahead of Nguyen’s 8♦ 2♦ before the flop, but if the saying anything can happen in poker could be applied to any hand, this one would be it. Sulsky stayed ahead on the flop after the K♣ 9♦ 7♥ was shown and his lead was cemented when the J♠ came on the turn.

The turn, while giving Sulsky a pair, also gave Nguyen and inside straight draw. Low and behold, the river showed the 10♥ came on the river, which gave Nguyen the straight he needed and sent Sulsky out of the tournament in third place.

It was a different sort of game in the Bonomo Radoja match up, with the lead changing hands between the two players. While Radoja took the early lead, Bonomo came up after winning a few strong hands and Radoja soon found himself at the threat of elimination.

Radoja retook the lead after a showdown with Bonomo where he flopped a pair of Queens with his Q♦ 7♣. The win put his stack at over 2.1 million chips, while Bonomo was still not far behind with a little over 1.7 million.

It only took seven more hands for the last semi-final to come to a close, however, as Bonomo’s J♦ 7♦ was unable to beat Radoja’s A♣ 10♦ on the board. Radoja hit of a pair of Aces after the flop came 3♣ A♠ 6♣, which won him the hand after the K♦ on the turn and the 3♠ on the river did not help Bonomo.

This put Radoja and Nguyen in the event’s grand final, and both players showed they really wanted the top prize and the Gold Bracelet.

The lead seesawed in the early stages of the final, but it was Nguyen who took a commanding lead. He held a 2 to 1 chip lead a little over an hour into play, and would not relinquish it easily despite Radoja’s best efforts to claw back.

Radoja was down to a little over one million chips at one point, and it looked like Nguyen was en route to winning the final and the event. However, a few wins and double ups significantly boosted Radoja’s stack and he soon found himself in the chip lead with a load of momentum going his way.

In the final hand of the event, Nguyen moved all in before the flop with A♦ 3♣ and was called by Radoja and his K♠ 9♠. Nguyen was ahead and remained ahead when the J♣ 6♥ 5♥ came on the flop. The 4♥ on the turn also kept Nguyen’s hand in the lead and appeared to be on the verge of a double up.

This was not to be, however, as the K♦ came on the river, giving Radoja a pair and winning him the tournament along with his second WSOP Gold Bracelet.