Mark Adams Leads Field after Day 1A of GukPT Goliath

The two-week old record for the “largest poker tournament outside of the US” is at risk of being broken following a busy opening day of the 2014 GukPT Goliath. 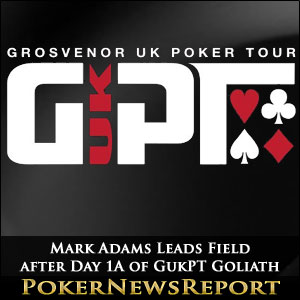 The two-week old record for the “largest poker tournament outside of the US” is at risk of being broken following a busy opening day of the 2014 GukPT Goliath.

There was a massive turn-out for Day 1A of the £250,000 guaranteed GukPT Goliath, with 542 players registering for the first of six opening flights that will be hosted at the Ricoh Centre in Coventry this week; and, after sixteen 40-minute levels of action, just 75 players survived – headed by local player Mark Adams, who bagged and tagged 497,500 chips.

Among the famous faces in the chasing pack is 2012 Goliath winner Les Fenton, who at one stage was keeping pace with the chips leaders, but who lost a massive pot to Danny Smith (AQ > KQ with two Queens on the board) in the last level of the night to close with 87,000 chips – some way below the average chip stack of 180,000 chips (36 Big Blinds).

The Goliath Wants Its Record Back!

Players who failed to make it through Day 1A of the GukPT Goliath have the option of re-entering the £120 buy-in event later in the week – an option which resulted in a number of short-stacked players applying a double-or-bust strategy during the last couple of levels of play, and which could see the GukPT Goliath regain the title for the largest live poker tournament to be held outside the States.

Last year, when the 2013 Goliath was won by Jake Skidmore, the 2,570 entries for the tournament made the event the largest live poker tournament to be held outside of the States. That record was eclipsed just two weeks ago, when 2,732 registrations were received for the Beijing Millions; but with the Goliath having six opening flights this year instead of the four Day 1s of previous years – and with there having been such a good turn-out on Day 1A – the prospects look good for the GukPT regaining its record.

In 2013, eighty-seven teams took part in the free-to-enter Goliath Team Event – which awards players points depending on their in the money finishing positions to determine the winning team. “Team Brighton Boys” won last year´s challenge and, to incentivise more players to form alliances for the team event this year, Grosvenor Casinos have put up a custom-made card table as the first prize along with entries for all the winning team members into a GukPT 25/25 event of their choice plus a seat in next year´s Goliath.

Team entries of between 2-6 players can be made via the dedicated Goliath Team Event page on the GukPT website up until the close of late registration on Friday; although we strongly recommend that players do not leave it until the last minute to enter the event, as Friday is expected to be another incredibly busy day.

Looking Ahead to the Rest of the Week

Although it would be surprising for the level of registrations over Day 1B and 1C to match those from yesterday, there will be a clearer picture of whether the 2014 GukPT Goliath is going to break the record for the largest live poker tournament outside the States as next weekend approaches. There is a comprehensive schedule of side events going on throughout the week, plus cash games and bar games to keep all visitors to the Ricoh Centre amused, so there should be strong support for the feature tournament throughout the week.

The 75 players who survived yesterday´s opening flight can take the rest of the week off, with those most looking forward to next Saturday´s Day 2 including: