The Sky Poker Tour kicked off in Nottingham as Mariusz Srok collected the top prize of £12,675 from the first leg at the Dusk Till Dawn Poker Club. 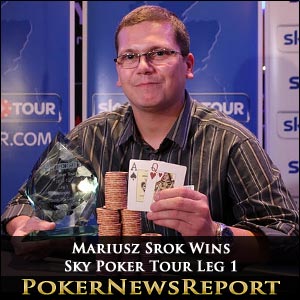 The fourth season of the Sky Poker Tour (SPT) kicked off in Nottingham as Poland’s Mariusz Srok collected the top prize of £12,675 from the first leg at the Dusk Till Dawn Poker Club.

Just five short of 200 players signed up for the £220 buy-in, but it was online qualifier Srok who outlasted the other 194 entrants to leave the English Midlands as the winner.

Starting out with 15,000 in chips and able to enjoy a blind structure that began at 25 and 50 with a 40-minute clock, rookie Mariusz Srok took down the six-handed Texas Hold’em tournament over two days after defeating Basharat Mahmood in heads-up play.

Srok’s success is all the more amazing as he collected his seat for leg one of the tour via a £5 satellite to mark his inaugural live poker tournament with a victory.

Not that the Pole had an easy passage to his incredible triumph as, once at the final table, he faced the likes of Grimsby’s Ben Nuttall – a regular on this tour as well as the Grosvenor UK Poker Tour – and the aggressive Mahmood.

Srok might have arrived at his heads-up clash with Englishman Mahmood – who won last month’s £150 No-Limit Hold’em Deepstack event at the same venue – with a 2 to 1 chip lead after eliminating three final-table rivals, but he could not have expected to emerge victorious after only a few hands.

The final hand saw the Englishman go all-in with J-9 offsuit, to be called by Srok, who held A♠-Q♥.

The 3-9-Q flop gave both players something, but the turn provided Srok with another queen to make the Pole the opening champ of the 2011/12 SPT, while Mahmood left with £7,410 for finishing second.

Of course, as well as collecting £12,675 for his success, Srok moved into first place on the tour’s leaderboard that takes in the seven legs of the SPT as well as the Grand Final back in Nottingham next September.

The leaderboard is well worth winning as whoever does top it will be made a Team Sky Poker member, which includes a year of entries to SPT events.

The second leg of the tour arrives at Newcastle’s Aspers Casino on December 10, with a £110 buy-in on offer at the one-day event.