Poker pro Maria Ho has made history by signing on to become the first woman commentator on poker broadcasts, joining the HPT for its 2013 tour. 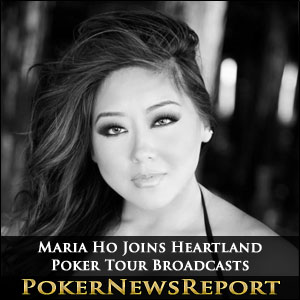 Poker pro Maria Ho has made history by signing on to become the first woman commentator on poker broadcasts, joining the HPT for its 2013 tour.

Ho will sit alongside Fred Bevill in January when the Heartland Poker Tour begins its ninth season. Widely-recognized as one of the top female players in the game, Ho takes the place of the departing Chris Hansen, who has been behind the microphone since the HPT’s inception in 2005.

Ho will provide commentary, analysis and strategic advice as the tour traverses the country. She has competed at several HPT stops in the past, including Florida and Nevada. Ho finished 29th in a $1,500 buy-in event in Michigan in 2010.

I am thrilled to be joining the HPT family, Ho said on the HPT website. As a player, I am flattered they are welcoming my poker expertise. As a woman, I am grateful to HPT for being the first poker show to offer this strategist position to a female. I look forward to bringing a new and fresh perspective to HPT broadcasts.

Ho has cashed for more than $1 million in live tournament events, including 18 times at the World Series of Poker. She has made final tables at the Aussie Millions, World Poker Tour, and twice at WSOP events. One of those WSOP finals was a second place finish for a payday of $540,020. She enjoyed an outstanding 2012 on the felt, cashing in six tourneys.

There is no better candidate than Maria, said HPT Director of Operations Jen Mastrud. As a winning player, she has a lot to offer in her analysis.

Ho is also no stranger in front of the camera, making it to Hollywood Week on Season 3 of American Idol, an appearance as a panelist on Anderson Cooper 360, and competing on The Amazing Race 15 along with poker pro Tiffany Michelle.

Her new partner in the broadcast booth, Fred Bevill, applauded the selection of Ho. She has a presence on camera, Bevill said. She’ll get the respect of the TV audience and add some glamour to the show. Maria joins us at a perfect time as we step up our show and tour.

HPT is syndicated nationally, available to more than 100 million U.S. homes. Plans are in the works to expand the show’s distribution internationally in 2013. As such, Ho is expected to gain further prominence in the industry as the first female poker commentator.