Milde ended Day 1a of the UKIPT Nottingham with a healthy chip lead of more than 60,000 as the £1 million guaranteed main event attracted a whopping 532 players. 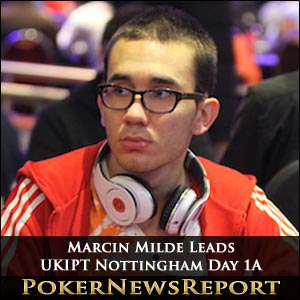 England’s Marcin Milde ended Day 1a of the UK and Ireland Poker Tour (UKIPT) Nottingham with a healthy chip lead of more than 60,000 as the £1 million guaranteed main event attracted a whopping 532 players.

Just 100 of those who paid the £700+£70 buy-in survived, however, as 11 60-minute blind levels were played out at the city’s always-popular Dusk Till Dawn venue, with PokerStars player Milde – who seemed to emerge from nowhere – ending the first of three opening-day streams on 278,700 chips.

The maximum field was originally set at 1,500, but that could be passed by some way by the time Day 1c registration ends on Friday – some hours after midday.

In fact, with Day 1b all set to surpass yesterday’s first stream field, there is every chance that the 1,700-player barrier will be broken to create a new record for an English tournament, while also ensuring that the winner will walk away with at least £220,000.

Milde, meanwhile, will be hoping for another impressive display when he returns to the tables on Saturday as he tries to collect his biggest pay day after picking up £8,500 ($13,624) for taking down the £250 buy-in No-Limit Hold’em side event at last year’s sixth leg of the UKIPT in Blackpool’s G Casino in mid-November.

The leading 10 players on this season’s third leg in Nottingham are all from the UK, with Milde being joined by some of his closest rivals by the end of Day 1a, including second-placed Sean Byrne – a DTD regular – on 214,800, as well as PokerStars qualifiers Adebayo Odetoyinbo (167,400) in seventh and Timothy Chung (159,900) in eighth.

PokerStars player Phil Long – who ended the day in fourth on 193,200 – was just one table away, while another regular with the world’s biggest poker room, Jamie Dale, held 153,600 in 10th just a further table removed from Milde.

Of course, some well-known players hit the rail, with a couple of previous UKIPT Nottingham winners being left disappointed.

Also missing out is Zimnan Ziyard – who took down the €4,000 buy-in No-limit Hold’em main event at the European Poker Tour (EPT) Loutraki for $477,146 in November – after he turned up extremely late for the first day.

Having only sat down during level six, Ziyard – the last player to register on Day 1a – was unable to make it through the five later levels and bust out before the chips were counted.

Top 10 Chip Counts after Day 1a of UKIPT Nottingham