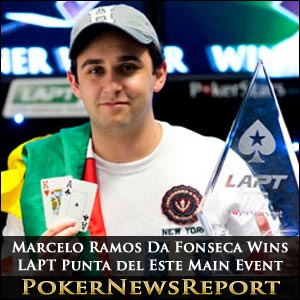 Sao Paulo’s Da Fonseca began the nine-handed final table at the Mantra Resort, Spa & Casino in eighth position on Day 4 of the event, but battled his way to the title, although not before he, Guillen and a second Brazilian in Francisco Baruffi Neto agreed to a deal that meant all three were guaranteed at least $116,240, while playing for an additional $38,000 and the title.

Da Fonseca – who regularly plays tournaments in Brazil – was way behind chip leader Baruffi Neto when the final day started, while Mexico City’s Guillen was even further back in ninth place.

Yet, both these players made it to the heads-up clash for the title, with the final two agreeing a new deal that saw $10,000 going to the runner-up and $28,000 being handed to the champion after Da Fonseca had sent Baruffi Neto to the rail in third place for $116,240.

Guillen started the head-to-head with the chip lead, holding 4,100,000 to the 3,400,000 of Da Fonseca. But the Brazilian soon took over at the top, before play slowed down somewhat as pots were won with either a small bet on the flop or a minimum-raise as both attempted to improve on previous third-place LAPT finishes.

The J♠ 10♥ 7♠ 2♣ 5♦ board was no help to Guillen and Da Fonseca finally secured his first LAPT title and main event trophy.

The final day had also started out slowly, before Argentinian Carlos Leoncio Mironiuk exited in ninth place as the first final table casualty for $15,390.

Action had folded to small blind Da Fonseca, who made a 58,000 raise, while Mironiuk then three-bet all-in for his last 516,000. Da Fonseca snap-called to show Q♣ Q♦ and dominate the 10♥ 9♥ of Mironiuk. The Argentinian’s hand failed to improve sufficiently on an A♣ 9♣ 3♠ A♠ Q♥ board as Da Fonseca made a full house.

The next player to hit the rail was another Argentinian, Guido Ruffini, who picked up $20,080 for eighth place after losing out to Baruffi Neto.

Guido Ruffini Out In Eighth

Fellow Argentinian Ivan Luca opened for 51,000 to be called by Baruffi Neto, while Ruffini – in the cut-off seat – then three-bet to 132,000. Action folded around to Luca, who took more than three minutes to consider his options before the clock was started. He was eventually timed out and his hand folded, before Baruffi Neto called to see Q♠ 2♥ 10♣ flop.

Baruffi Neto decided to check, only for Ruffini to bet 136,000. Baruffi Neto made the call to see the 10♦ on the turn and then checked once again. But Ruffini remained aggressive and lobbed in 200,000 chips. However, Baruffi Neto then surprised all onlookers by shoving all-in, with Ruffini snap-calling to show K♥ Q♦ to be behind his opponent’s J♠ 10♥, which had become trip tens.

The 8♥ river was no help to Ruffini as he exited and Baruffi Neto took a commanding lead by moving to over 2,400,000 chips from what was the biggest pot of the tournament – so far.

Seventh place and $26,770 went to Russian Vladimir Dobrovolskiy – who had qualified online – when he became the latest victim to Baruffi Neto’s rise to dominance.

Dobrovolskiy looked like he would double-up with his 10♠ 10♥ after he and Baruffi Neto has gone all-in pre-flop, with the Russian still holding the lead in the pot after a flop of 3♠ 7♠ 6♦ and a turn of 8♥. However, the Q♥ arrived on the river to give Baruffi Neto a pair of queens from his A♣ Q♣ hole cards.

Guillen then managed a double-up against Luca soon after when his Q♥ 10♥ held against his opponent’s Q♣ 7♣, before Argentinian Osvaldo Silvio Resquin hit the rail in sixth place for $35,970.

Uruguay’s Pablo Joaquin Melogno had become more active, upping his aggression significantly once play had become six-handed play. But Resquin decided he’d had enough of this and pushed back by going all-in, only for Melogno to call while holding A♥ 7♥.

Day 3 chip leader Luca – who had been annoying his opponents by tanking at almost every opportunity – was next to leave in fifth place for $46,000, but not before he had angered Baruffi Neto in one hand when again taking all the time he could before the Brazilian asked for the clock. Obviously aiming to frustrate, small blind Luca allowed the clock to run down before his cards were mucked by the dealer.

Now four-handed, play slowed down as the remaining players picked up small pots with pre-flop bets, before short stack Melogno – who had picked up numerous blinds with minimum raises – moved all-in after a raise from Guillen.

Guillen made the call to show A♥ K♣ for a healthy advantage over Melogno’s Q♦ 8♦. The 9♠ 4♦ 4♠ changed nothing, while the 10♦ turn provided Melogno with numerous outs. However, the river card was not a diamond, eight, jack or queen, with the 5♥ sealing his fate by exiting in fourth for $60,420.

Guillen, Baruffi Neto and Da Fonseca then agreed their three-way deal, before a huge hand developed between the first two players. On the button, Baruffi Neto made it 175,000 to go and big blind Guillen responded by three-betting to 425,000.

Baruffi Neto took his time, but eventually made the call to see a flop of 5♠ A♦ 9♥, with Guillen making a continuation bet of 275,000. Baruffi Neto made the call and the dealer placed the 3♣ down on the turn. Guillen bet again, this time 400,000, before Baruffi Neto moved all-in to be swiftly called by Guillen.

Mexican Guillen showed A♣ J♣ to be well in front of the 4♠ 3♠ tabled by Baruffi Neto. Guillen stayed ahead on the K♣ river to cripple his Brazilian opponent, who was left with just 135,000 chips.

Then came the 90-plus minute battle that ultimately saw Da Fonseca emerge as the second Brazilian LAPT champion – following in the footsteps of Murilo Figueredo, who collected $146,000 for winning last year’s Viña del Mar main event.

The LAPT will now take a break – with the World Series of Poker (WSOP) running in Las Vegas – for a few months, before returning for the Colombia National Poker Championship in Medellin from August 7 to 12.