Schreiner headed the pot-pouri of international stars the end of a day. Only 15 players were eliminated, one of whom being 2005 WSOP bracelet winner Joe Hachem. 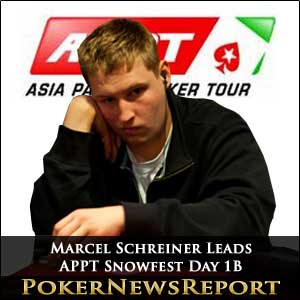 Marcel Schreiner headed the pot-pouri of international stars at the end of a day in which only fifteen players were eliminated – one of whom being 2005 World Series of Poker bracelet winner Joe Hachem.

Germans, Russians, Australians, an Irishman and even a Thai Scotsman joined the locals on Day 1B of the Asia Pacific Poker Tour “Snowfest” Main Event, being hosted at the Skycity Casino in Queenstown, New Zealand.

Whereas Day 1A had comprised of mostly New Zealand´s finest poker players, Day 1B was the Australian´s turn to make an impact on the tournament. As well as Joe Hachem, we were blessed with the presence of 2009 ANZPT Queenstown Main Event champion Danny Chevalier, 2007 APPT Sydney champion Grant Levy and online poker star Tom “tollgate” Grigg.

Neither Hachem nor Levy will be returning for Day 2 on Friday as will not Australian Daniel Neilson, who had the dubious pleasure of being “first man out” – busted by Russian qualifier Artur Prokhorov´s K♦ K♣ (versus 9♦ 6♦). Kings were also the reason for the departure of the day´s lone female poker player, Leanne Hass, this time at the hand of Dale “Daleroxxu” Philip, who just happened to be in Queenstown canvassing votes for the British Poker Awards (there is an element of truth in that!).

As the day progressed, it rapidly turned into “qualifier´s day”. 15 of the 28 players that remain gained their seats through online satellites – one of whom, Christopher Roy (Q♠ Q♥), was responsible for eliminating Irishman Reggie Lyons (A♦ K♦) and there was even a case of two combining when Marcos Oliveira (A♣ Q♣) first ran into qualifier Ben McLean (K♥ K♦) and in the very next hand Oliveira (10♠ 10♥) shoved right into fellow qualifier Ryan McKay´s A♦ A♣.

Pocket Aces were also the reason that the German Marcel Schreiner heads the second of three Day 1s – eliminating Grant Levy in the final level of the day with A♠ A♣ against Levy´s 9♦ 8♣. However, his chip stack of 72,600 is only enough to place him in fourth place overall, such was the aggressive nature of Tuesday´s play, and with the third Day 1 to play tomorrow.