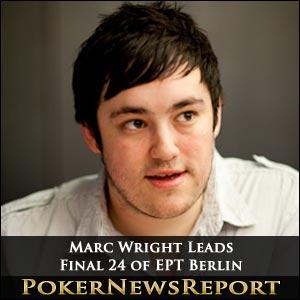 Cornwall’s Wright has already guaranteed himself his biggest ever live tournament pay day as the players who line up at the three tables today are all assured of making at least €20,000 from the €3,725,000 prize pool after Sweden’s Simon Persson exited in 25th place for €17,500 to bring the day to a close.

Wright’s previous best cash came just a few weeks ago in Dublin’s Burlington Hotel when he picked up $20,288 for finishing 13th in the €3,200 buy-in No-Limit Hold’em Irish Open main event.

So it appears that the English pro is on the up after eliminating the likes of Austrian Jan Bendik (50th for €13,000), German PokerStars qualifier Gereon Sowa (44th for €13,000) and American Kenny Hicks (30th for €17,500) on the way to the top of the leaderboard in Germany’s capital city.

He also prised the lead from Russian Day 1a leader Vladimir Geshkenbein and Swede Anton Wigg – who topped the field after Day 2 – during yesterday’s second level, before then charging clear to hold an 89,000-chip lead over second placed Thomas Cibak, from the Czech Republic, when the chips were bagged up.

But maybe Wright should be most wary of the challenge likely to come from American Kevin MacPhee, who sits on 430,000 chips in 17th place.

The Idaho native is aiming for a historic double in Berlin after taking down the season six main event for $1,356,429 – and will surely be eyeing up a double to add to his 2010 success.

Then again, there are other definite dangers with Stockholm’s Wigg (11th on 973,000 chips) and Geshkenbein (10th on 1,053,000), of Regensdove, also having EPT crowns in the bag after the former won $672,818 for securing the 2010 Copenhagen title and the latter pocketed $552,901 when taking down the SnowFest main event in Hinterglemm, Austria, back in March of last year.

However, it was Englishman Wright who made the biggest moves of the day, taking his starting stack from 585,000 to well above the chip average of 931,500 – with his only lapse arriving close to the end of Day 3, when his flush draw failed to materialise against Corrons.

All-in plays were taking place regularly during level 22 – when the blinds were at 8,000/16,000 with a 2,000 ante – as we neared the final 24, and Wright faced up to another from the Spaniard that resulted in the Englishman dropping back 770,000 as Corrons doubled-up to finish the day in fifth spot.

However, the Q♠ turn and 9♥ river were no good to Wright and Corrons survived to fight another day.

Second placed Cibak was another competitor to make a late charge up the rankings after sending Persson to the rail in 24th to end the day.

Cibak snap-called to show the dominating Q♣ Q♥ as Persson revealed his 10♠ 10♣. The flop came A♦ 9♥ 2♠ to keep the Czech ahead, while the 4♠ turn and 6♠ river ensured that Persson’s challenge ended somewhat earlier then he would have hoped.

However, it wasn’t a good day for Team PokerStars Pro, with the remaining trio of Vanessa Selbst, Jan Heitmann and Ana Marquez crashing out yesterday to complete a miserable tournament for the stars of the world’s biggest poker room.

Brooklyn’s Selbst – a one-time World Series of Poker (WSOP) bracelet winner – exited in 48th for €13,000 at the hands of Canadian Chen.

Selbst then bet 150,000 with Chen again making the call ahead of the dealer producing the 7♦ on the river to ensure that a backdoor flush was on. The 27-year-old American seemed confident when moving all-in for about 280,000, only for Chen to snap-call with the nut flush, after completing the winning hand with runner-runner, to send Selbst off to the rail.

Meanwhile, Germany’s Heitmann lasted longer to take 29th place for €17,500, while Spaniard Marquez was an early Day 3 casualty when exiting in 97th for €7,500.

However, some other well-known faces made it into Day 4, including Belgian Davidi Kitai (13th on 946,000) and Russian PokerStars qualifier Andrey Zaichenko (22nd on 278,000).

Today will see the last 24 competitors reduced to just eight for tomorrow’s final table – which will be broadcast on PokerStars.tv on a one-hour delay with hole cards shown – as the €825,000 top prize is awarded to the eventual champion.

Poker fans should also note that the broadcast will be available in several languages, including English, Spanish, Russian, Italian and, of course, German.