November-Niner Marc Etienne McLaughlin leads the World Poker Tour Main Event in Prague after storming into a sizeable chip lead during the last level of Day 2. 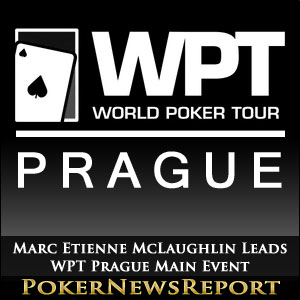 November-Niner Marc Etienne McLaughlin leads the World Poker Tour Main Event in Prague after storming into a sizeable chip lead during the last level of Day 2.

McLaughlin jumped from mid-table obscurity to the top of the leaderboard in one hand, after calling the shove of Russian poker player Alexander Lakhov (K♦ Q♦) on the flop and Turn of 7♣ 6♦ 9♣ / K♠. McLaughlin rolled over 6♠ 6♥ for a flopped set, and Lakhov missed his two-outer to be eliminated from the tournament in 64th place.

As was widely anticipated/hoped-for, a stack of late entries for the WPT Prague Main Event swelled the numbers – and the prizepool – for the tournament. Thirty-five players late registered for the tournament, bring the final entry up to 306 and creating a prize pool of €881,555.

The top thirty-six players will cash in the WPT Prague Main Event, with the winner collecting €206,230, and the bubble is likely to burst late this evening as only 63 players remain in the tournament after five levels of action were played during Day 2.

Prior to the late jump up the leaderboard by Marc Etienne McLaughlin, the chip lead in the WPT Prague Main Event had been shared by Party Poker ambassador Kara Scott and Andrey Shatilov. Scott (K♠ J♠) had chipped up nicely when she flopped a flush against Micha Hoedemaker (9♦ 9♣ – for a set of Nines) after Shatilov had destroyed Sonny Franco´s chip stack 3♣ 3♠ > J♣ 10♣ on a Jack-high flop which also contained a Three.

Overall chip leader coming into Day 2 was Visali Firsau, and he maintained a decent position throughout the day – eliminating Will Failla J♣ J♦ > A♦ Q♣ on his way to bagging and tagging 284,500 chips. Firsau had been at the head of the chip counts since Day 1A, but Day 1B and Day 1C chip leaders – Jason Duval and Kuljinder Sidhu – were bust out of the event on Day 2.

Sbohem from Prague (it means Farewell)

Along with Duval and Sidhu, a number of other top players failed to line their pockets with some Christmas spending money by busting out of the WPT Prague Main Event on Day 2. Marvin Rettenmaier was an early casualty – his Queens failing to hold against Andrey Shatilov´s Ace-King – and Liv Boeree completed a pretty unsuccessful trip to Prague (by her standards) when running Ace-Queen into Guillaume Rivet´s pocket Aces.

Former WSOP Champion Jonathan Duhamel was eliminated by former WSOP runner-up Martin Staszko pocket Kings > pocket Fives, and Lasell King – who enjoyed a deep run in the EPT Prague Main Event – was unlucky to be bust out towards the close of play A♦ 7♣ > A♠ J♥, when Guillaume Rivet´s 7♣ filled the gap in the board of 8♥ 4♠ 4♥ / 5♣ / 6♥.

Looking Ahead to Day 3 of the WPT Prague Main Event

There should be a further five 90-minute levels of play on Day 3 of the WPT Prague, during which time it is likely that the money bubble will burst. Those in the best positions for collecting a WPT cheque during the next few days include: