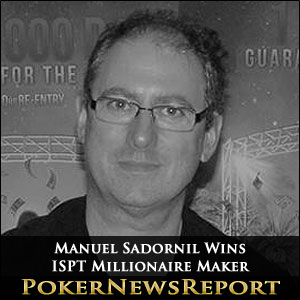 Despite clashing with the WSOP Final Table and UKIPT Isle of Man, the ISPT Millionaire Maker at the Casino de Tanger in Morocco still managed to attract 216 players for the 9,900 MAD buy-in event (about €880) including Guillaume Darcourt and Juan Manuel Pastor.

After three opening flights (and multiple re-entries) the field was reduced to 117 for the start of Day 2, during which the bubble burst shortly after the dinner break. The top 23 players cashed in the ISPT Millionaire Maker, while the unfortunate bubble boy – Rafael Jurado – was consoled with a package for the next big event at the Casino de Tanger.

Sixteen players returned to the Casino on Sunday to play down to a winner and, after two hours of play – which saw the shock elimination of overnight chip leader Anthony Hairston A♣ 3♣ (flopped nut flush) < Roland Van Morckhoven´s Q♦ 3♥ (rivered Full House) – the final table of nine was set, headed by Mohamed “El Gran Tito” Dris.

Five Players Bust Within an Hour

With blinds of 12,000/24,000 (ante), it did not take long for the short stacks be forced into action. Xavier El Fassy shoved his stack in from the cut-off with A♠ 3♠ but found Manuel Sadornil waiting on the button with A♣ J♦ and El Fassy was bust in ninth. El Fassy was quickly followed by the last lady standing – Amina Benkiran (K♦ 10♥) – who was already dominated by Karaca Fedayi´s A♥ 9♦ before Fedayi´s hand improved to a Full House.

A few hands later Mohamed Dris also improved his A♥ 9♠ to a Full House to bust Said Basri (3♣ 10♠) in seventh and extend his chip lead, until Manuel Sadornil (6♥ 3♥) turned a straight to send Fedayi to the rail in sixth and take the chip lead. Sadornil then chipped up to over 5 million chips when eliminating Roland Van Morckhoven in fifth, in a hand in which Van Morckhoven (A♣ 5♣) had flopped four cards to a flush and a gutshot straight, while Sadornil (9♣ 7♥) flopped top pair which filled up into a Full House by the River.

His exit in fourth place came at the hands of Marcel Luske, who shoved all-in from the Small Blind with A♦ 4♥ and was called by Dris (8♣ 6♣). Although pairing his 8♣ on the flop of A♠ 9♣ 8♠, Luske had also paired his Ace and was well ahead in the hand. The K♣ on the Turn gave Dris a chance of a backdoor flush, but it was not to be, as the 5♦ was dealt on the River.

Three-Handed Deal Made – Correia Bows Out

With the exit of Mohamed Dris in fourth position, the three remaining players discussed a deal. Chip leader Manuel Sadornil was not happy at first, but eventually agreed to a split of the prize money which would see him lock up 630,000 Dirhams and the other two players each guaranteed 500,000 Dirhams. This left 100,000 Dirhams to play for and the game resumed.

Marcel Luske lost a stack of his chips to Manuel Sadornil almost immediately, but was able to double back up (Q♠ J♦ > 7♠ 7♦) when a Jack on the flop saved his tournament life. Sadornil then crippled Joao Correia A♣ 9♣ > K♣ 4♣ before Luske took the last of the Portuguese player´s chips J♥ 5♣ (two pairs) > Q♥ 3♦ (missed straight draw).

Joao Correia´s departure game a few minutes after midnight and set the heads up between Manuel Sadornil (7.3 million chips) and Marcel Luske (2.85 million chips); but it took more than five hours before Manuel Sadornil was to claim victory. During that time Luske was constantly reminding Sadornil that he was the more experienced player (he is also a PokerStars team Online pro) and used his experience to eat into Sadornil´s stack of chips until Sadornil turned the tables on him and reduced the Dutchman´s stack down to less than one million chips.

A Turned Flush, a double-up (K♠ J♦ > Q♥ 7♥) and a 2 million chip pot (Q♦ Q♣ > A♦ 5♦) enabled Luske to get back into the game every time that the Spaniard felt he was on the verge of winning, but eventually – after 5 hours of heads-up play – the deciding hand arrived. Sadornil (3♠ 10♦) made a substantial pre-flop raise which put Luske (K♠ 7♥) all-in. Luske was looking good for another double up as the flop and turn missed both players, but the 3♣ on the River gave Manuel Sadornil the small pair he needed to claim victory in the ISPT Millionaire Maker.

It was not in a stadium, and the winner did not receive a million Dirhams, but Manuel Sadornil will not be complaining after taking down the ISPT Millionaire Maker at the Casino de Tanger in Morocco.