Malta Added as a New Destination for the European Poker Tour

PokerStars has announced that the Portomaso Casino in the luxury resort of St Julian´s will be the venue for the first ever EPT Malta from March 18th-28th. 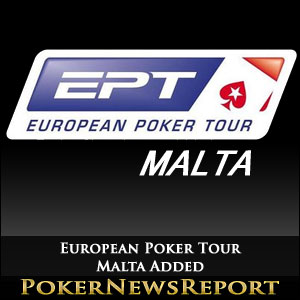 PokerStars has announced that the Portomaso Casino in the luxury resort of St Julian´s will be the venue for the first ever EPT Malta from March 18th-28th.

The last remaining venue for Season 11 of the European Poker Tour was revealed last night, when PokerStars announced that the Portomaso Casino would host the first ever EPT Malta from March 18th-28th.

Like many other stops on the “Tour”, the dates and venue have been specifically chosen to coincide with a regional tour – in this case the Italian Poker Tour (IPT) – meaning that there will be in excess of forty poker tournaments played over eleven days, plus plenty of cash game action.

The dates of the inaugural EPT Malta also coincide with the 14th edition of the GPI European Poker Awards which will be held on March 25th. The event will recognise the best European poker players of 2014 based on their Global Poker Index rankings and on the opinion of a panel of judges.

A Proven Destination for a Prestigious Event

For more than a decade, Malta has been a major player within the European poker industry. The Mediterranean republic is home to the Global Poker Index and PokerStars.eu, and Malta´s Lotteries and Gaming Authority licenses 25% of the world´s online poker sites – including PokerStars.eu.

The Portomaso Casino has already hosted many prestigious poker events including multiple legs of the World Poker Tour, the Grand Live and the Battle of Malta; and General Manager of the Casino – Eros Ganzina – commented after the announcement of EPT Malta:

We are delighted and proud to announce our new collaboration with PokerStars and the EPT. Malta is renowned as being a very popular poker destination and in the last five years Portomaso Casino has proved to be more than capable of hosting large-scale events. The EPT is a landmark event for us and we are looking forward to hosting such a prestigious tournament. We are positive that poker players will enjoy the new destination.

A Fresh and Exciting Stop on the EPT Schedule

The Mediterranean island is also home to a number of world-class poker players, who have relocated to Malta in recent years to escape restrictive regulations in their home countries. EPT President – Edgar Stuchly – believes that the mixture of quality players, a warm climate and lots of great tourist activities will make Malta a great destination for the penultimate leg of EPT Season 11.

With good connections to all major European cities, Stuchly anticipates both the Italian Poker Tour and European Poker Tour events will see a good turnout of players, and believes that Malta will be a fresh and exciting stop on the EPT schedule. Stuchly´s sentiments were echoed by PokerStars General Manager in Malta – Michael Holmberg – who added:

Malta is where PokerStars.eu is based, so we are very happy to bring the EPT home to what is the perfect combination of a 24/7 poker offering, as well as the chance to escape the grind and discover everything that Malta has to offer.

Potentially there could be as many as three Global Poker Index events complimenting the EPT Malta. The date of the GPI European Poker Awards has already been announced, and the company is also intending to host a Global Poker Conference and the inaugural Global Poker Masters.

This will not be the first time that the Global Poker Index has teamed up with PokerStars to host the European Poker Awards. Earlier this year, the 2013 awards were handed out during EPT Deauville – Ole Schemion winning Player of the Year after being crowned Rookie of the Year in 2013.

The Global Poker Masters was originally announced last July as a World Cup for the Sport of Poker to coincide with the FIFA World Cup. The event was originally intended to be played in North America but – if Alex Dreyfus could work his magic on the world´s leading players and get them to Malta – not only would the Global Poker Masters be fascinating to observe, it would also enhance the quality of the events at the EPT Malta.