Car salesman Maksim Rozenfeld took down Event #1 of the Borgata Poker Open series to collect $363,091 for his victory but said he will not give up his day job. 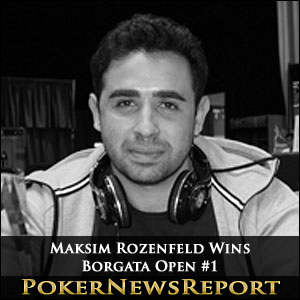 Car salesman Maksim Rozenfeld took down Event #1 of the Borgata Poker Open series to collect $363,091 for his victory but said he will not give up his day job.

The Staten Island (NY) resident was speaking after coming from behind in the heads-up to beat Dan Wach – who finished runner-up in the opening event of the Borgata Poker Open for the second year in a row.

Wach can consider himself particularly unlucky, as he had come into the final day of the event which a substantial chip lead and was ahead in both the pivotal hands in the heads-up which decided the outcome of the tournament.

After two very busy Day 1s and an exceptionally long Day 2, just 18 players (from the 4,482 entries) took their seats at the Borgata Hotel Casino and Spa in Atlantic City to battle out the conclusion to the $2,241,000 Borgata Poker Open Event #1.

Dan Wach (14.335 million chips) had a sizeable advantage at the head of the chip counts, ahead of Vimy Ha (7.630 million chips) and Maksim Rozenfeld (7,260 million chips) but, by the time the final table of ten had been set, Wach had slipped into fifth place behind Brian Henryk and Igor Skochilo.

Beware the Jacks in Borgata

The first level of the day passed without much excitement but as blinds rose to 250,000/500,000 (ante 50,000) the short-stacked players were shoving with any reasonable starting hand. Ralph Massey had the misfortune to run his pocket Nines into Maksim Rozenfeld´s pocket Jacks to be sent to the rail in tenth place, before Ryan Dion (Q♦ 9♦) missed all his outs after a flop of 8♦ 10♦ 8♣ and fell in ninth to Alida Veliu´s – who also had pocket Jacks.

There was more than an element of misfortune about Andy Andrejevic´s departure in eighth position. In the first of two consecutive hands, he doubled up Alex Apostol 99 < AK when Apostol hit an Ace and a King on the flop, but he looked like he was about to double back up against Alida Veliu 10-8 -v- A-Q, when the board ran K-5-2 / 10 / to give Andrejevic the lead in the hand. Unfortunately the River card was a JACK – which gave Veliu a rivered straight and sent Andrejevic crashing from the tournament.

Wach, Rozenfeld and Veliu on the Rise

Wach was also responsible for the elimination of Alex Apostol in fifth, after Apostol had done well to nurse his short-stack into a six-figure payday, but who could not improve his K♦ 9♦ passed Wach´s A♠ Q♣. Alida Veliu had been very active on the final table and a nice double-up against Brian Henryk (88 > 77) had seen the big man lose half his stack as Veliu moved into second in the chip counts. Henryk was eventually to depart in fourth (A-Q > J-10) – with Alida Veliu again being his tormentor – and, as the game went three handed, Dan Wach (42 million chips) held a narrow advantage over Veliu (37 million chips) with Maksim Rozenfeld (10 million chips) back in third.

Alida Veliu´s participation in the Borgata Poker Open #1 came to a quick end. After doubling up Maksim Rozenfeld, the three remaining players checked through a flop of Q♥ 10♦ 3♠. Following the 2♣ on the Turn, Rozenfeld (Q♦ 7♦) bet 1.7 million chips, to which Dan Wach folded, but Veliu (A♦ 10♠) raised to 4 million. Rozenfeld moved all-in with his top pair and Veliu (second-best pair) made the call. The Q♠ on the River gave Rozenfeld trip Queens, and Veliu was out in third.

Going into the heads-up, Rozenfeld was at a 40 million -v- 50 million chip disadvantage, but that was all to change just before the dinner break when Rozenfeld shoved all-in on a board of Q♥ 3♥ 4♣ / Q♠ / 10♥. Dan Wach open folded his 7♥ 4♥, but the damage had been done and Rozenfeld moved into a 27 million chip lead.

Rozenfeld (7♠ 4♠) had opened pre-flop to 2.4 million and Wach (K♥ K♠) raised to 5.5 million. Rozenfeld called and the two players saw the flop of 9♠ 3♠ 6♥. Wach bet 2.4 million, which Rozenfeld made 10 million, and Wach responded by shoving his last 25 million chips onto the table. Rozenfeld did not hesitate to make the call and the cards were on their back.

Dan Wach was well ahead with his pocket Kings, but Rozenfeld´s supporters were calling for a Spade or any Five that would give Rozenfeld victory in the event. As it was, the 7♣ on the Turn and 4♦ on the river gave Maksim Rozenfeld victory with runner-runner two pairs, and Dan Wach was runner-up in the first event of the Borgata Poker Open for the second successive year.