Maksim Kolosov Leads After Day 1A of EPT Tallinn

A whole bunch of big-name poker pros have descended on Estonia for the PokerStars European Poker Tour (EPT) event in capital city Tallinn. 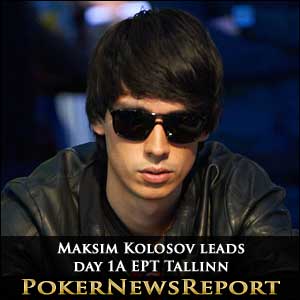 A whole bunch of big-name poker pros have descended on Estonia for the PokerStars European Poker Tour (EPT) event in capital city Tallinn.

With players such as Rupert Elder, Roberto Romanello, Kent Lundmark, David Vamplew and Arnaud Mattern – all EPT main event winners – beginning Day 1A of the opening tournament of the eighth season, it was something of a surprise that Russian online poker specialist Maksim Kolosov emerged as the chip leader on 102,725 as the field was cut from its original 92 to 68 at the lavish Swissotel.

With the €4,250 buy-in main event taking place in the heart of this year’s European City of Culture, players started out with 30,000 chips, but it was Kolosov who ended the day – following seven levels of play – best pleased, although all the above former EPT main event winners did survive to make it back for tomorrow’s Day 2.

Kolosov produced a tremendous display of poker as he withstood the challenge from some of the continent’s leading players to accumulate a massive stack, with the likes of Romanello and Lundmark sitting at his table, as well as EPT Snowfest runner-up Kevin Vandersmissen, British professional Mathew Frankland, and Fernando Brito – who is the current EPT Player of the Year.

The 24-year-old remained calm throughout, however, as he crippled the always-dangerous Vandersmissen to take the chip lead.

In early position, the Belgian raised to 725, but St Petersburg native Kolosov three-bet to 1,725 as everyone else at the table folded. Once back to Vandersmissen, however, he four-bet to 4,200, with Kolosov making the call.

However, with the 8♥ arriving on the river, Vandersmissen check-called Kolosov’s 12,000 bet. Kolosov then showed A-K to win the hand and take his stack up to about 74,000, which only grew as the day wore on.

Day 1B, meanwhile, should see a massive increase in participants, with organisers expecting upwards of 200 players to register.

Among those starting today will be London-based JP Kelly and German star Sebastian Ruthenberg – who finished 26th and 55th respectively at this summer’s World Series of Poker (WSOP) main event – as well as EPT regulars John O’Shea, of Ireland, and Finland’s Juha Helppi, and Norwegian Annette Obrestad and Englishman John Eames.