After the fields from the two Day 1s have combined, Italian poker player Marcello Marigliano leads the way in the Partouche Poker Tour. 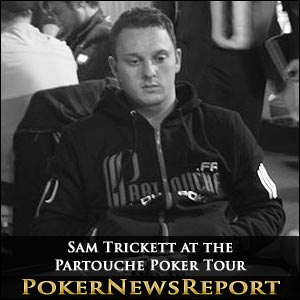 After the fields from the two Day 1s have combined, Italian poker player Marcello Marigliano leads the way in the Partouche Poker Tour.

Marcello Marigliano – who placed 40th in this event last year – holds a narrow chip lead at the beginning of Day 2 of the Partouche Poker Tour Main Event at the Palm Beach Casino in Cannes ahead of Lithuanian Kristijonas Andrulis and a host of international poker stars including Jason Mercier, Justin Bonomo, Patrik Antonius and last year´s Partouche winner Sam Trickett.

At one stage Trickett (not wearing an ISPT logo) had run his stack over 100,000 chips but had the misfortune to run KK into AA just before the close of the day, but was still able to bag up 55,000 chips – considerably more than the player sitting next to him, Ilan Boujenah (13,500 chips), who finished fourth behind Trickett in the 2011 Partouche Poker Tour Main Event.

Other players who returned from last year´s final table enjoyed a fairly respectable start to the event. Only Oleksii Kovalchuk failed to make it into Day 2, with Mads Wissing (71,900 chips), Roger Hairabedian (51,400 chips), Alexandre Coussy (46,700 chips) and Salman Behbehani – who lost to Trickett in the heads-up in 2011 – finishing with 24,500 chips.

Trickett´s ISPT co-ambassadors (who were wearing ISPT logos) also enjoyed mixed fortunes. Michael Mizrachi bagged up 144,800 chips on Day 1A to lie in eighth place on the leaderboard (three places behind brother Robert) while Liz Lieu suffered the disappointment of a first day departure. After 7 levels of play, Day 2 of the Partouche Poker Tour will recommence with 283 of the original 562 entrants still involved (although late registration is still available), blinds of 400/800 – ante 100 – and an average chip stack around 60,000.

Those who Can in Cannes after Day 1