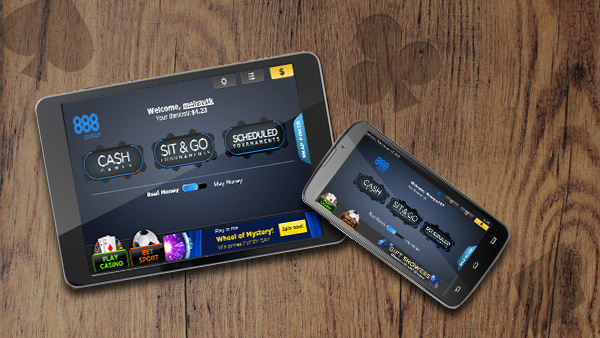 In a bid to expand the accessibility of its poker options and make more exciting in-game features available to mobile players, 888Poker has just launched a new app that will be available on Android and iOS.

Built From the Ground Up

With such a thing as internet poker, there can never be too many options. Players are rightfully always on the lookout for platforms that can better suit their varied playing styles and preferences. With that in mind, the folks at 888Poker have just revealed their new product that, according to a company spokesperson, took months of continuous player feedback and testing to perfect.

The company says that the new 888Poker app prioritizes the user experience and ease of use as tools towards guaranteeing optimum enjoyment for its keen playing community. An intuitive set of controls and diverse difficulty levels have been leveraged by the developers to create a level playing field and accommodate players with varying skill levels.

This isn’t 888poker’s first foray into mobile internet-based poker. While the company’s first attempt was groundbreaking for its time, it has slowly begun to show its age in a sea of cutting-edge offerings from other gaming companies.

The new app is better optimized for mobile in many ways. Chief of them, perhaps, is the new portrait feature that allows players to hold their phone straight-up in portrait mode throughout the user interface – as opposed to being forced to tilt it sideways for a forced landscape-style experience. Players can now one-hand their devices and whilst playing the tables and scrolling through the lobby.

The app will also better incorporate different screen sizes and device aspect ratios into its backend for a uniform experience across all smartphone and tablet types.

The company didn’t stop at revamping the user experience either. It is introducing other features into the new app that are sure to add to its entertainment value for players. Here is a highlight of the new features:

888Poker is pairing the launch of the new app with its brand new “Made To Play” campaign. The company is offering more than $1,000,000 in prizes. As part of the total sum, events like around-the-clock freerolls and other tournaments will guarantee more than $30,000 in weekly prizes. There will also be daily “Happy Hours” promotions and $1,000 “Gift Drops” every five minutes.

Although the company’s launch material isn’t clear on a date when users can download the app on respective app stores, we’re sure it will make its debut in the coming days. The company has, therefore, asked players to keep their eyes peeled and check their website frequently for updates on availability. The platform will be available to players all over the US and surrounding territories.