Day 1b of the Macau Poker Cup Red Dragon event has finished and the turnout was a fair bit larger than that on the first starting flight. 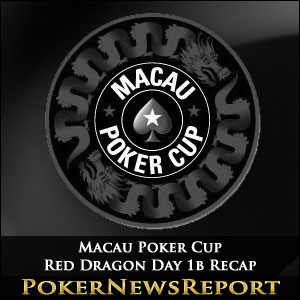 Day 1b of the Macau Poker Cup Red Dragon event has finished and the turnout was a fair bit larger than that on the first starting flight.

A total of 234 poker pros took the felt on Day 1b as they played for their chance at taking out the top prize. 63 of those players survived the day, keeping their tournament winning aspirations alive for at least another day.

Hong Kong’s Brian Long Yip topped the chip ladder on the second starting flight in a huge way as, with a stack of 180,900, he has 62,000 more chip than the second most chipped up player. That player is Australian Michelangelo Longabela, who also played on Day 1b. He finished the day with 118,900 to his name.

China was also very well represented on Day 1b, with Daoxing “Bobo” Chen finishing the day third on the chip ladder, with 115,000 chips, while Hong Kong’s Mei Ngok was not too far behind with a stack of 113,800 chips.

Ngok propelled herself into being one of the current chip leaders of the event after she won a major hand near the end of the second starting flight. Dan Sing went all in after the turn of a board that had shown 4♥ 8♥ K♦ J♠, a major move considering that he only had 7♣ 4♣.

Still though, it was a move that had Ngok contemplating what her right course of action should be, despite having a strong hand with K♥ J♣. Ultimately, Ngok chose to call and was confirmed the winner of the hand after the 10♦ came on the river.

As expected, PokerStars pro and Macau Poker Cup regular Celina Lin turned out to play on Day 1b, but unexpectedly did not last long. Lin was knocked out of the Red Dragon main Event early on in the night after going all in with {6x} {8x}, which was a good move since two eights came on the flop.

Her opponent called and was initially behind with {Ax} {Qx}, which was good enough for a pair of Queens. Unfortunately for Lin, however, another Queen came on the river, which gave her opponent a bigger Full House. That won them the hand while Lin’s hopes of winning this season’s Main Event came to an abrupt end.

The turnout for both Day 1a and 1b has brought the total participants to 369 so far. While it will take an amazingly massive turnout on Day 1c for the record Red Dragon Main Event turnout to be broken, it is still very possible for the total number of participants to break the 650 mark.

We will find out whether it does indeed reach that mark or not tonight when Day 1c of the Macau Poker Cup Red Dragon Main Event takes place.