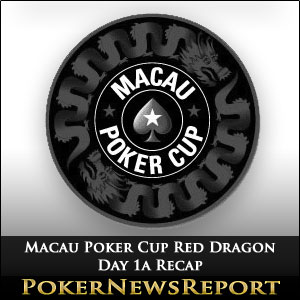 A fairly modest total of 131 poker pros from around the region and the world turned out on Day 1a, with just 31 of them making the cut to the second day of play. Two of the remaining field finished the day with more than 100,000 chips to their names.

Australian poker player and recent ANZPT Queenstown Main Event runner up Daniel Laidlaw was one of those, he finished the first starting flight with a stack of 109,600 chips, which puts him top of the current field. The other player to have reached a six figure stack is Hong Kong’s Kenneth Yuen Kiong Leong, who will have 108,000 going into Day 2.

New Zealand’s Thomas Ward is third on the chip ladder with 99,700 to his name, while German player Immanuel Siebert is not far behind with 92,200 chips. Australian Frank Maley rounds out the top five stacks on Day 1a of play, with a stack of 90,400.

Event #5 winner Yue Liu turned out to try and win the Red Dragon event, but could not replicate her stellar performance as she was eliminated from Day 1a. Liu went all in before the flop with A♦ J♥ while her opponent called with Pocket Jacks. Liu was unable to find an Ace on the board and she was knocked out from the tournament.

Australia’s Yixin Wu was the winner of one of the day’s biggest hands after eliminating two players from the event in the late stages of the day. Craig Blight went all in before the flop with A♠ 10♠ and was called by Wu, who dominated him with A♦ K♠ and the other player, who showed Q♦ 9♠.

Wu fell behind after the flop came 6♠ Q♣ 4♣, and it looked like he was going to lose the showdown when the 4♥ came on the turn. The river turned things back in Wu’s favour, however, when the K♥ was shown, giving him the top pair and chipping him up to a little over 50,000 chips.

It is highly likely that April’s Red Dragon event winner Terry Fan will be back to defend his crown either today or tomorrow. Other notable players like Celina Linv- who also won the first event at this Macau Poker Cup – are also believed to be turning out for their chance at the top prize.

Day 1b of the Macau Poker Cup Red Dragon event is set to take place later today at the PokerStars LIVE at the City of Dreams.