While the Atlantic City gaming industry had a tough year with four casinos shuttered in 2014, another gambling region 8,000 miles away has its own problems. 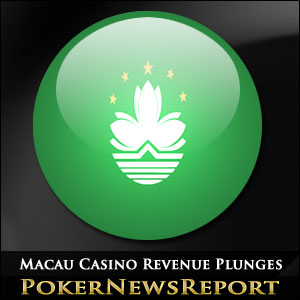 While the Atlantic City gaming industry had a tough year with four casinos shuttered in 2014, another gambling region 8,000 miles away has its own problems.

Macau casinos have seen their collective market value decrease to the tune of $75 billion. That includes the Macau casino holdings of Sheldon Adelson, who suffered a nearly 40% decline, Bloomberg reported. But the reasons for the decrease are entirely different from those experienced in New Jersey.

Casinos in Macau are heavily reliant on high rollers. Extremely wealthy gamblers are responsible for roughly 66% of revenue accumulated by the casinos. It is considered unhealthy and an unfavorable long-term business plan to derive such a big percentage from VIPs.

Macau is a Chinese territory and the only region in China where casino gambling is allowed. The country’s president, Xi Jinping, is on a mission to wipe out corruption and believes that a number of high rollers may be laundering money through Macau casinos. That mission is keeping some of the wealthy gamblers away from the gaming enclave.

It is believed that a crackdown will soon be waged by the Chinese government on efforts to move money through Macau — money that was perhaps obtained via ill-gotten means. Rumors of the crackdown have sent Macau casino shares tumbling.

A process has begun that aims to shift the economy of Macau away from one that is dependent upon high rollers. That includes the tightening of regulations that has prompted casinos to aim their marketing strategies toward tourists and vacationers, as opposed to catering to the high rollers or VIPs.

Macau has experienced six consecutive months of falling revenue, a first for the world’s largest gambling industry. And 2014 will go down as the first year in which revenue has declined.

Over in New Jersey, the problems faced by Atlantic City casinos in 2014 and recent years pertain more toward competition from casinos in nearby states. The casino gambling market has perhaps become oversaturated on the East Coast, resulting in revenue declines in New Jersey for eight years running.

Shutdowns of the Atlantic Club, Showboat, Trump Plaza and Revel casinos have made 2014 a year to remember — but for all the wrong reasons. On the bright side, the Trump Taj Mahal avoided hanging out a “Closed” sign, and future agreements between the parties involved may see the casino avoid the ax completely.

Two gaming regions of the world experiencing completely different issues. But issues that are both quite serious with regard to long-term health and sustainability.