Plans are currently underway in Macau to hold the world’s richest poker tournament to be known as the Macau Pro Am Open, guaranteeing a prize pool estimated to be in the ballpark of $65 million to $100 million, with the champion of the Main Event pocketing $25 million. 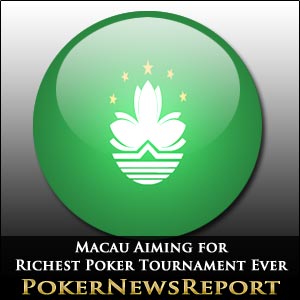 Plans are currently underway in Macau to hold the world’s richest poker tournament to be known as the Macau Pro Am Open, guaranteeing a prize pool estimated to be in the ballpark of $65 million to $100 million, with the champion of the Main Event pocketing $25 million.

Scheduled for sometime in the spring of 2013, the tourney will be sponsored by at least five Chinese companies, according to William Murray, a businessman from the United States who claims to represent one of the companies involved.

Registration for the event has a tentative cutoff date of Dec. 15, 2011 on a basis of first come, first served, making no exceptions to the professional status of possible entrants in the poker industry.

A meeting to organize the record-setting event was held in Hong Kong last March to establish the tournament’s infrastructure, Murray said. Although not elaborating on details, he did indicate that sponsorship of the event is not aligned with any casino, hotel or any other familiar hosts of such events. There are currently plans for other gambling games to take place prior to the Main Event, ranging from Baccarat to Texas hold’em poker.

The buy-in for the event has not yet been announced, but “we can deduce that the entry fees will be substantial,” Murray admitted. Based on Murray’s projections on the number of players expected to participate, the buy-in is likely to be around $200,000, which would likely shut out all but the wealthiest players and top professionals. In comparison, the $100,000 Super High Roller event held this year at the PokerStars Caribbean Adventure totalled 38 entrants, awarding $1.5 million to Eugene Katchalov for besting the other 37 players. Murray’s stated goal of 500 poker players buying in at the Macau Pro Am event seems high, but many high rollers have been finding high-stakes action in Macau lately.

One such high roller was none other than Phil Ivey. With Macau attaining recognition over the years as a favorite destination for many of the world’s top poker pros, Ivey chose the venue to mark his return to live tournament play following his self-imposed seven-month hiatus from the game due to the controversy surrounding Full Tilt Poker, his sponsor. Ivey entered the Main Event of the PokerStars Asia Pacific Poker Tour Macau, arriving in time to begin play in the second level of Day 1A. This was Ivey’s first major tourney since the World Poker Tour Bay 101 Shooting Star Championship in March, the month prior to the Black Friday indictments of poker sites accepting US players like Full Tilt, PokerStars and Absolute Poker.

Although busting out in Day 2 of the Main Event, which was eventually won by PokerStars Team Online Pro Randy “nanonoko” Lew for first place prize money of $483,902, Ivey stayed around for the high-stakes no-limit Texas hold’em cash games played at StarWorld’s Poker King Club. The game features healthy blinds at $10,000/$20,000 in Hong Kong dollars, which translates to approximately $1,300/$2,600 in American dollars at current exchange rates.

Some of Ivey’s competitors in the big money cash game were Tom “durrrr” Dwan, Guy Laliberte, Johnny Chan, James Bord, Sam Trickett, Peter “GARFIELD25″ Chan, Andrew “good2cu” Robl, and Winfred Yu, among other players. Recent posts made on popular online poker forums have confirmed that Patrik Antonius wanted to participate in the high-stakes no-limit action, but was not allowed due to his “tight” playing style, the sort of player that regular players in Macau prefer to avoid.

Getting back to the Macau Pro Am Open, Murray sees the staging of the world’s richest poker tournament as a way for Macau to continue building on its reputation as a hotbed of high-stakes poker action.