After calling Atlantic City “the enemy” six months ago, Steve Wynn has changed directions and would like to be included in New Jersey’s online gambling scheme. 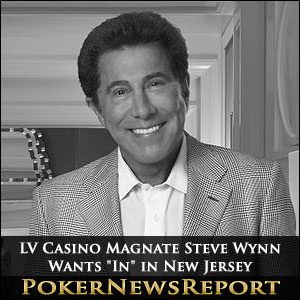 After calling Atlantic City “the enemy” six months ago, Steve Wynn has changed directions and would like to be included in New Jersey’s online gambling scheme.

Deciding that its better to be friend than foe, the casino mogul and principal owner of Wynn Las Vegas and Wynn Macau is one of 37 applicants who filed the necessary paperwork to obtain an online gaming license in the Garden State, the Press of Atlantic City reported. Wynn currently has no real estate holdings on the Eastern seaboard and is apparently seeking to partner with one of the dozen land-based casinos situated there.

In February, Wynn appeared before the Pennsylvania Gaming Control Board in hopes of building a casino in Philadelphia. Pennsylvania neighbors New Jersey and the two states have been duking it out for the no. 2 spot in U.S. land-based gambling revenue behind the industry leader, Nevada. New Jersey was in second place for many years before Pennsylvania managed to wrestle the runner-up position by poaching some New Jersey gamblers and keeping Pennsylvania’s wagering residents from crossing the border.

Wynn’s bad mouthing of Pennsylvania’s rival was done in an effort to expand his empire to the Keystone State. But with New Jersey set to launch Internet gambling in only three months, the 71-year-old wants in there as well.

As previous owner of the Golden Nugget casino in Atlantic City, Wynn is quite familiar with the New Jersey gambling scene. But he sold the casino some 26 years ago and used the capital to invest in Las Vegas. The Golden Nugget in Atlantic City is now known as the Atlantic Club casino, one of two brick and mortars in the Garden State who have yet to name any partnership agreements in the up-and-coming online gambling regime.

How ironic it would be if Wynn’s interests in New Jersey went full circle and landed back at the Atlantic Club, where he was principal owner under the Golden Nugget name in the 1980s. Such a pairing is pure speculation at this point, but an interesting one considering that the Atlantic Club is without a known partner and is reportedly still up for sale after the deal with PokerStars fell through earlier this year.

In succeeding decades after unloading the Golden Nugget in 1987, Wynn flirted with a return to New Jersey. In the latter part of the 1990s, he planned to develop a new casino on the Atlantic City boardwalk but the project never materialized. Likewise in 2007, a Wynn Atlantic City proposal was being bandied about. That project also never saw the light of day, allowing Wynn to devote more time to his Las Vegas and Macau gaming establishments.