Swedish kid Lukas Berglund reckons becoming the youngest champion of the World Poker Tour was a “surreal” experience after last night picking up the WPT’s Spanish Championship crown in Barcelona – as well as €206,000 – after five days’ play. 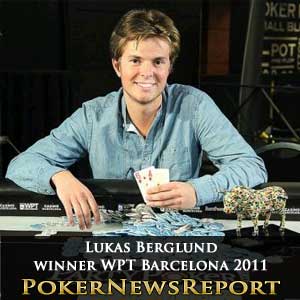 Swedish kid Lukas Berglund reckons becoming the youngest champion of the World Poker Tour was a “surreal” experience after last night picking up the WPT’s Spanish Championship crown in Barcelona – as well as €206,000 – after five days’ play.

The 18-year-old – who just recently left high school – began the day in fourth place, but stream-rolled the final table to knock out every one of his seven opponents as he finished top of the pile from 216 entrants at the €3,500 buy-in event.

Berglund was still trying to take it all in as he enjoyed his success, saying that “it seems quite unreal” as he “didn’t start the table with that many chips”, but got “very lucky”, before adding that he “also played quite well” at his first live table as thousands of poker fans watched the live stream online.

However, before the final day’s play really got going, Berglund had to rely on a massive piece of luck when his sevens held up against Markus Ristola and Artur Koren.

That hand was a double elimination, but Finnish player Ristola, with A-K, and Koren – with queens – looked to have Berglund in trouble when the latter pushed all-in.

Berglund called and then Ristola re-shoved. However, with the board showing 7-5-10-J-3, it was Berglund who emerged victorious with trip sevens to eliminate Ristola in eighth (€20,200) and one-time chip leader Koren in seventh (€27,000).

Berglund said: “I had a decision with the two sevens. I thought for a while and then called and then the small blind found two queens. I hit a seven on the flop. I wasn’t all-in. I had chips left”.

Thereafter, it really was a one-man show as Berglund “then eliminated all the players” at the table once he “got a lot of” chips and “started bullying the table quite a bit.”

It was Alexander Sidorin’s turn to return to the rail next at the Gran Casino in the Catalonian capital city as the Swede’s pocket queens beat the Russian’s A-5. That left Sidorin in sixth place for €33,500.

Then came the elimination of Spaniard Guillem Usero in fifth (€40,000), when the teenager “got lucky with an open-ended straight draw” that arrived on the river, to be followed by Jorge Duffour (€47,000) when the Swede’s A-K beat his opponent’s 10s.

Frenchman Frederic Bussot (€64,000) was next to go in third as his K-9 was beaten by queens, leaving just Romain Matteoli in the way of a Swedish clean sweep.

Having amassed a massive chip lead over Matteoli, it took Berglund just 15 minutes and four hands to defeat the Frenchman in head-up play.

With all the chips in on a board of 7-8-4-5, Matteoli showed his 8-3 for top pair as well as an inside straight draw. However, Berglund had A-6 for the straight to leave Matteoli  as runner-up, although a tasty €118,000 will surely ease his pain at finishing behind the sensational Swede.

Berglund also received “a really nice bull” as well as “a lot of money” for winning, but will be thrilled to also have been awarded a $25,000 seat for the forthcoming WPT World Championship.

Although new to live poker events, the teenager has “been playing quite a bit online” and, while he did “think about” all the people watching him via Party Poker’s Blog, he “just tried to play” his game “and it went well and I ended up with all the chips”.