Ludovic Lacay rebounded from the disappointment of losing the heads-up in the PLO Mix Max to take the lead in the WSOPE Main Event after two opening flights. 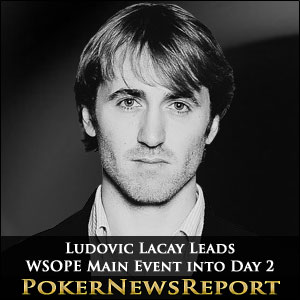 Ludovic Lacay rebounded from the disappointment of losing the heads-up in the PLO Mix Max to take the lead in the WSOPE Main Event after two opening flights.

One thing you need to have in poker is an inner strength to overcome the disappointments that the game throws at you and yesterday Ludovic Lacay – who surrendered a 2:1 chip lead in the climax of the WSOPE PLO Mix Max – proved he had just that; strolling into Day 1B of the WSOPE Main Event and finishing the day with the chip lead ahead of a field packed with international poker stars.

Lacay´s day started well – hitting a set of Eights to relieve Jason Lavallee of 13,000 chips during the second level – and his aggressive play throughout the day paid dividends – forcing players out of valuable pots when he may or may not have had the best cards – before chipping up into the lead in a classic Aces > Kings confrontation during the last level of the day.

Even though more than 60 percent of the players who entered the WSOPE Main Event safely negotiated the first six levels, we lost 888Poker ambassador Shane Warne, Jason Mercier and Kevin MacPhee on Day 1A, and David Baker, Will Failla and John Juanda on Day 1B. Unfortunately those players will have to endure another day on Paris drizzle before the commencement of the last bracelet event in the WSOPE series – the €25,600 buy-in high rollers event which starts tomorrow.

Looking Ahead to Day 2 of the WSOPE Main Event

Day 2 of the World Series of Poker Europe Main Event will begin at noon (Paris time), with the game entering Level 7 (blinds 300/600 – ante 75) and the plan to complete six more 90-minute levels before bagging and tagging takes place just before midnight. Players who performed well on the first two opening flights, and who will not be unduly worried by the increasing blinds include:-