Ludovic Lacay leads the fifty-nine survivors in the PartyPoker WPT Montreal Main Event at the end of Day 2 – during which the 99-player money bubble burst. 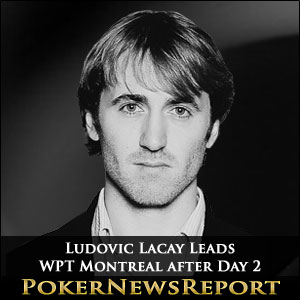 Ludovic Lacay leads the fifty-nine survivors in the PartyPoker WPT Montreal Main Event at the end of Day 2 – during which the 99-player money bubble burst.

357 players returned for Day 2 of the PartyPoker WPT Montreal Main Event at the Playground Casino, knowing that only ninety-nine of them were going to cash in the tournament and, after a further ten levels of play, just fifty-nine survivors will carry their chip stacks forward to today´s Day 3.

At the head of the chip counts is Ludovic Lacay – who took the chip lead in one of the last hands of the night, when calling an ambitious bluff by Byron Kaverman. Lacay´s flopped top pair held, and he bagged up 1,261,000 chips at the close of play to hold a narrow advantage over Marco Cannizzaro and Jerry Wong.

As mentioned in yesterday´s PokerNewsReport, plenty of players entered Day 2 of the WPT Montreal Main Event with fewer than 20 Big Blinds, and consequently the action was fast and furious from the off. Matt Salsberg, Jonathan Duhamel, Steve O´Dwyer and defending WPT Montreal Champion Jonathan Roy were all knocked out within the first couple of levels.

There was to be no back-to-back victories for WPT Caribbean winner Tony Dunst, or for any of the former champions – Anthony Zinno, Jordan Cristos, and Scott Seiver – who were eliminated from the tournament before the money bubble burst, and Vanessa Selbst was particularly unfortunate to bust from the event – having had her Aces cracked by Michael Noor´s flopped set of Fives, and then running her pocket Jacks into Griffin Benger´s pocket Kings.

Now Will You Believe that Ace-Queen is Expensive?

It has been well chronicled on this website that Ace-Queen is the most expensive opening hand in poker and, after yesterday, at least one more player will support that view – Vincent Jacques. During Level 18 – just a few spots away from the money – Jacques was sitting pretty comfortably with a stack of 600,000 chips (around 100 Big blinds), when he called Darren Rabinowitz´s shove to set up an A♣ Q♥ -v- J♣ J♠ confrontation. The Jacks held to double up Rabinowitz, but Vincent Jacques was still safe from elimination with 290,000 chips.

Then, with only 102 players remaining (and 99 to be paid), Vincent Jacques was dealt A♦ Q♦ and Rabinowitz shoved into him again – this time with A♥ 10♥. Jacques hesitated, but eventually made the call. Rabinowitz paired his Ten on the flop, and Vincent Jacques was sent to the rail just moments before he could have collected a $5,204 min-cash.

The bubble burst when two other players, who did not need to put their tournament lives on the line, did so (probably just to get a mention in PokerNewsReport). Valerie Ross had 71,500 chips when she shoved from UTG+1 with A♦ K♠. She was called and covered by Patrick St-Onge (2♥ 2♦) who won the hand on an incredible board of Q♦ Q♥ 6♥ (flop – St-Onge in the lead), K♥ (Turn – Ross pairs her K♠) and A♥ (River – Ross hits two pairs, but St-Onge completes his Flush draw).

Then, Sebastien Drolet-Poitras – who was the overall Day 1 chip leader – inexplicably four-bet shoved 215,000 chips pre-flop with 10♥ 10♦ and got called by David Paredes who was holding A♥ K♣. Drolet-Poitras´ crazy decision to put his tournament life on the line seemed to be justified after the flop of 6♦ 6♥ 4♥, but the A♦ was dealt on the Turn to end Drolet-Poitras´ participation in the WPT Montreal Main Event to the relief of the remaining 99 players who were in the money (and bloggers the world over!).

Poker is All About How You Play Your Jacks

Two more levels were player after the bubble had burst, during which time the traditional double-or-bust chipfest occurred. David Paredes moved into a temporary chip lead when his pocket Jacks were too good for the pocket Nines of Armah Attoh, and then Kevin MacPhee cracked Claude Elharrar´s pocket Jacks with a set of Nines to move towards the top of the leaderboard himself.

Darren Elias bust out Antonio Esfandiari after his pocket Jacks improved to Quads on the flop, and Marco Cannizzaro became the first player across the one million chip barrier when his Queens held against Joseph De Mes´ A♠ K♠ on a Jack-high board. Ludovic Lacay then finished Day 2 of the WPT Montreal Main Event by calling Byron Kaverman´s bluff with a paired Ten on a Ten-high board against Kaverman´s opening hand – which had a Jack in it!

When play recommences at the Playground Casino in Montreal, the games will be entering Level 21 (blinds 6,000/12,000 – ante 2,000). The next player out is assured of $9,307 for fifty-seventh place, but all eyes will be on the $500,824 first prize that the winner of the WPT Montreal will collect on Thursday. The plan for today is to play down to the final eighteen players, and those with the best chance of still being around tomorrow include: