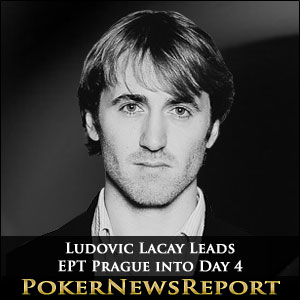 After Day 3 of the EPT Prague Main Event, Lacay again leads a significant live poker tournament – only this time he has an advantage bigger than all the three previous “chip leads” combined and he might have timed his run to the top of the leaderboard a little better.

Lacay stormed through to the top of the chip counts during a swift but confusing approach to the bubble being burst, during which time tournament organisers had to stop play to do a head-count of how many players actually remained in the event.

Day 3 of the EPT Prague Main Event started with 189 players returning to the Hilton Hotel in search of a share of the record-breaking €4,883,950 prize pool. Only 151 players would finish in the money, so the first of the five 90-minute levels played yesterday was fairly nervous.

The bubble burst at the beginning of Level 16 when three quick eliminations meant that there was no need for hand-for-hand play to take place. Nonetheless, the EPT staff at the Hilton Hotel in Prague took the precaution of stopping the event to physically count how many players were left in the tournament before it could be confirmed that the remaining players were indeed in the money.

Lacay Chips Up into Lead – but Watch Out for the Germans

The following two levels saw the typical rush of “double-or-bust” hands – during which time Ludovic Lacay and Stephen Chidwick were the first players to bust through the one million chip barrier.

Stephen Chidwick fell away from the top of the leaderboard due to doubling up Max Silver 8♥ 8♦ > 5♣ 5♠, but Ludovic Lacay maintained his position until the close of play – closely pursued by three German players.

Julian Track, Lassell King and Ole Schemion all completed Day 3 of the EPT Prague Main Event with chip stacks in excess of one million chips, and will pose a significant threat to Ludovic Lacay on Day 4 if the French poker maintains his recent record of getting into a good position, and then blowing it.

Looking Ahead to Day 4 of the EPT Prague Main Event

Day 4 of the EPT Prague Main Event will start with a few hands remaining in Level 20, and then into blinds of 6,000/12,000 (ante 2,000) when Level 21 gets underway. The plan is to plan five complete levels or down to 18 players – whichever happens first – with the Final Table scheduled for Wednesday. The players at the top of the chip counts who are more than likely to feature as the EPT Prague Main Event progresses include: