Ludovic Lacay wins the battle of the “L´s” to take down the PokerStars sponsored EPT San Remo Main Event from Jason Lavallee and Artem Litvinov. 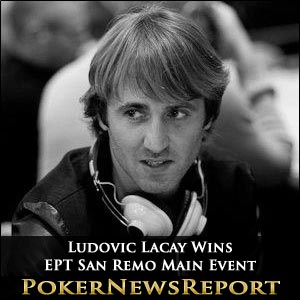 Ludovic Lacay wins the battle of the “L´s” to take down the PokerStars sponsored EPT San Remo Main Event from Jason Lavallee and Artem Litvinov.

Following six days of frenetic action at the Casino Sanremo, the final day of the EPT San Remo Main Event was a particularly grueling event. For ages it seemed that none of the final eight players were able to take control of the tournament and, with the cards falling kindly when short-stacked players were in trouble, there was only one elimination from the tournament in the first five hours of play.

The unfortunate player within that first five hour period was Ismael Bojang. Having enjoyed a sensational penultimate day to start the final table in fourth place with 2,845,000 chips, Bojang was frequently involved in the early action, but mostly due to folding to three-bets after initiating the action himself. Despite a double-up against Jason Lavallee (Q♠ Q♦ > K♥ 4♥), Bojang continued to fold when pressure was applied and eventually shoved his last 1.5 million into the pot with A♦ K♥ only to be called by Jason Lavallee 10♣ 10♦ with the board running low.

Jason Lavallee maintained his lead at the top of the leaderboard until Ludovic Lacay grabbed a stack of his chips in the process of eliminating Adrian Piasecki. In Level 30, with blinds of 50K/100K – ante 10K – Lacay had opened the betting for 200K from under the gun. Piasecki moved all in for his last 1,455,000 chips and Jason Lavallee called. Lacay moved all-in himself for a little over 5 million chips, and Lavallee pulled out from the pot with 9♥ 9♣ (and a 1.5 million chip loss) as Piasecki showed A♣ 9♣ and Lacay rolled over A♦ K♣. The board never provided any assistance for the Pole, but resulted in a Broadway straight for Lacay, who shot into the lead with a 3 million chip advantage.

Angelo Recchia – Italy´s last remaining hope of a home victory – had been getting it quietly during the evening – building his chip stack up to over 4 million, and he leapt into second position after the elimination of Micah Raskin in the most fortunate of circumstances. On a flop of 8♣ 8♦ J♠ Recchia had three-bet Raskin up to 875,000. Following the turn (7♦), Raskin called Recchia´s bet of 625,000 and was all-in after the river (J♥). Raskin turned over A♠ 8♠ for a Full House (Eights over Jacks), but had been rivered by Recchia, who revealed A♣ J♦ for a better Full House (Jacks over Eights).

Jason Tompkins, who was hoping to become Ireland´s first ever EPT Main Event Champion, had seen his chip stack dwindling throughout the final day, and his eventual departure was orchestrated by Russian player Artem Litvinov in three cruel hands. In the first, Tompkins 9♠ 9♦ hit a set on the flop, but Litvinov turned a Heart Flush. In the second, Tompkins moved all-in with 5♣ 5♥, but was called by Litvinov´s Q♦ Q♣, and the Irishman´s tournament was all over when he got the last of his chips in with A♣ 4♥, but could not improve enough to better the Russian´s K♠ K♥.

Immediately after Jason Tompkins´ elimination, Jason Lavallee grabbed back the chip lead when rivering a Heart Flush to come from behind against Ludovic Lacay, however Lacay was soon to re-capture a commanding lead as he dismantled the chip stack of Angelo Recchia in three consecutive hands. In the first, he forced Recchia out of a million chip pot with a post-flop shove, and then hit two pairs with K♣ 9♦ to relieve the Italian of a further 1.5 million chips. The Italians tournament was over in the very next hand as he shoved his last 3.5 million with A♣ 7♣, only to see Lacay call with J♥ J♠ and hold.

Artem Litvinov had enjoyed a dream day, coming into the final table as the short stack and enjoying an early double-up against Angelo Recchia (A♥ Q♥ > K♣ {Q♠) before taking all of Jason Tompkins´ chips (above). But his dream was about to come to an end. On a flop of 2♦ 5♠ 6♠, Litvinov moved all-in with 8♠ 7♠ for a possible straight flush. Ludovic Lacay called with 8♠ 6♥ for top pair and watched as the 10♣ and K♣ fell on the turn and river to eliminate Litvinov and end hopes of an unlikely victory for the Russian.

Three streets of aggressive betting saw Lavallee release his hand in the first valuable pot, before Lacay hit a Full House (Kings over Tens) to half Lavallee´s chip stack once again. Within 45 minutes of the heads-Up starting it was all over when, on a flop of Q♦ 4♣ 10♣, Ludovic Lacay raised the pot up to 750,000 chips. Jason Lavallee called quickly, but took much longer to decide on his action after Lacay had fired in another 1,400,000 following the J♥ turn. Eventually he decided that if it was going to happen, it was going to happen now and responded by pushing the last of his chips into the middle of the table.

Lacay called and turned over Q♣ 10♥ for two pair. Lavallee winced as he showed 8♣ 6♣ for a possible flush draw.

Jason Lavallee´s previous luck on the river eluded him on this occasion, as the river card was the 10♦ to give Ludovic Lacay a Full House and the title of EPT San Remo Champion.

In his post-victory interview, Ludovic Lacay said that he felt like it was Christmas and then disappeared off to the bar to console Jason Lavallee – a nice guy and a deserving winner.

797 players entered the PokerStars sponsored EPT San Remo Main Event, creating a prize pool of €3,845,650 which was shared among the top 120 players. Following the final table deal, Ludovic Lacay returns to France with €744,910, with the rest of the final table payouts looking like this:-